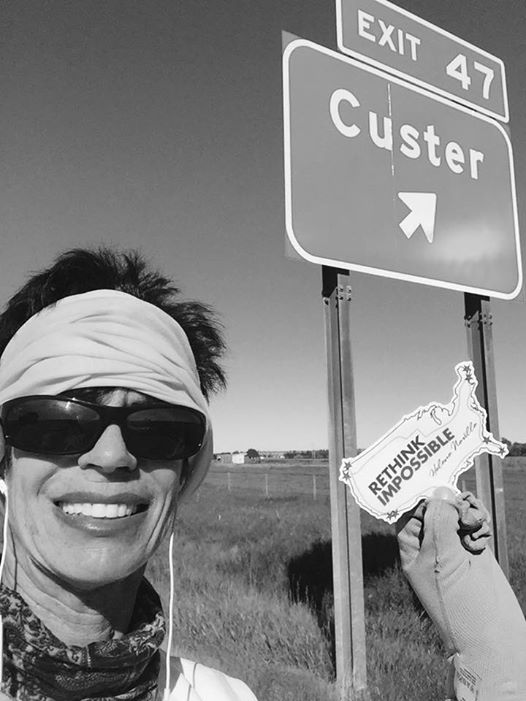 Breaking news: woman runs around the country, becomes the cure for the unmotivated. Meet Helene Neville. She is a nurse, author, speaker, educator, volunteer, cancer-survivor, and as if that’s not enough to inspire you, at 53 years old, Neville is a runner who is about to complete a perimeter run of the continental U.S.

Yes, you read that right—she has been systematically running the 10,000 miles around the edges of the country for the past 5 years. In 2010 Neville, a passionate wellness advocate, decided to promote her book Nurses in Shape: The Right Dose! by running the length of the southern U.S., carrying her book the entire trip. Along the way she stopped at schools, hospitals and businesses to speak about her journey and message of health. She says she knew at the finish line that she would continue around the country, and over the next few years she did exactly that, culminating in her current route that stretches from Maine to Washington. And while most people recover from a tough run with a little time off, Neville writes an entire book after each epic leg of her journey.

For Neville, running is a way of practicing what she preaches. She says her long-distance runs are a vehicle to promote her message of “rethinking the impossible.” As a four-time cancer survivor, she is the ultimate example of this idea; if she can overcome her medical setbacks and go on to conquer this amazing physical feat, anyone can achieve their goals. Neville’s wish is to restore health to America and hopes people will be challenged to do whatever feels impossible to them, even if it’s something as simple as eating better or jump-starting an exercise routine.

What’s even more remarkable than the enormity of her journey is the lack of both press and funding for it. Neville is setting a world record with this run (she will be the first nurse, grandmother, and cancer-survivor to complete it) but without a PR team or major sponsor, her accomplishment is largely under the radar. She relies on donations and the help of friends to drive the car (formerly a dilapidated RV) that drops her off in the morning and picks her up 25 miles or so later; at night she often crashes in the homes of supporters she meets along the way. This grassroots approach may seem counterproductive to promoting her message on a large scale, but Neville says she wouldn’t have it any other way. She loves meeting people up close and personal, and some even join her for a mile along the way.

So how does she do it? Besides obviously keeping her body in great shape, she keeps her mind sharp by watching a TED talk daily. Neville says she has never been more challenged than by being a speaker and that she wants to be great at sharing her story and knowledge. And great she is. To talk to her is to wish you had a notepad to jot down her every word; the woman is a fountain of motivational thoughts. Her tagline, “one on the run,” is more than a literal description of her journey. She says, “The one is not me, singular…we’re all one team,” and when asked if she thinks she is inspirational, she says she prefers to think of herself as “a conduit of inspiration…it comes full circle and I’m inspired.”

And she’s not done yet. When she finishes her run in early September, she plans to switch gears to politics and is considering running for the Nevada State Assembly. If her perimeter run is any measure of her future success, she’ll most certainly go far with whatever she does next.