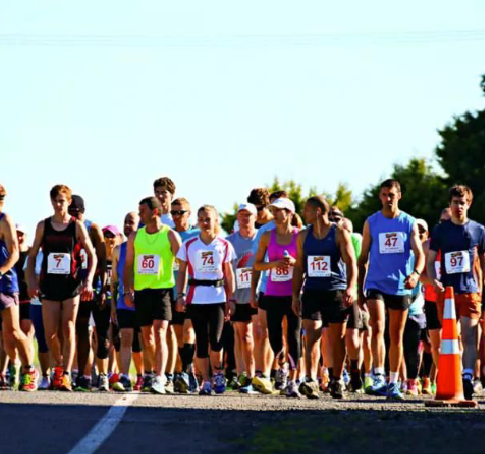 I ran my very first half marathon last year when I was 14 years old. I was new to running and had never run a race before. No one pushed me into starting to run—but I don’t even know how I got into it. I hated exercise! I would always do my absolute best to avoid it. I even mastered my mom’s signature so I could write fake notes to get out of P.E.

When I started running, I was slow and felt like an elephant plodding along. It felt like gravity was against me, but I kept at it, even when everything was working against me. My mom was and still is in the diagnostic stage of multiple sclerosis, and watching her go through that was a huge stressor in my life. Running became a release for me. I got also bullied on the bus home every day, and no one really stood up for me. The kids thought it would be fun to call out my name and sometimes throw orange peels at me. I let go of my anger by running hard and fast. I also liked the feeling of disappearing for an hour or two—and the freedom to run wherever I liked. I know many paths within 20 kilometers of my house.

I remember the day I decided I was going to run a half marathon. At school we got asked, “What is success?” Some people said money and fame but I honestly didn’t know what success was—what is money and fame unless you are happy? I’ve always thought, I don’t want to be just another person that grows up, gets a job, family, etc., and then just leaves this world. I want to do something amazing with my life or do something that not many people can do at my age and something that makes me happy. Then it came to me: I wanted to run a half marathon, and at that point, I was only up to 5K.

Related: 5 Habits To Run Strong In Your Teens

My mom was supportive and believed I could do it, but as soon as I told people at school, they said “You can’t do it” or “You’re too young.” A lot of people thought I was crazy, or I was going to damage my body, stunt my growing or wreck my joints. Those comments gave me more drive to prove them all wrong. I talked to a gym coach and trained myself to learn my body’s capabilities.

Training was hard. I had absolutely no clue where to start or what my goal should be. I looked online to get information on what kind of shoes to buy, nutrition, what to expect and what training I should do. My goal was to run it in under 2 hours. The hardest thing for me was getting up before 6 a.m. to go running because I wouldn’t have time after school. I love to sleep, so it was a real struggle. Looking back I’m proud that no one made me get up—I did it myself. I live on the outskirts of town, so the view of the sun rising is amazing. Another struggle was finding determination to keep running. I had two weeks where I completely gave up; I didn’t want to do it anymore. I had lost all enthusiasm to carry on, but looking back I now don’t know why I got to that point.

A couple of days before the race, I found out my racing partner pulled out because of knee issues. Nerves increased because I was on my own now, but it didn’t stop me. The night before the race, it was so hard to sleep. I was incredibly nervous. When I got to the start line the next morning I saw I was the youngest person. In a way I felt proud, because I was going to prove myself. The course was pretty flat with only a few hills, so I found the race enjoyable. When I got to 10K, I was feeling pretty good so I upped my pace a bit.

I can’t even describe what I felt when my family was cheering me on. I noticed around the 11K mark that I was passing quite a few people that had sped ahead of me at the start line. But the last 3K was a killer for me— the hardest of my life! I honestly just wanted to stop running and walk for a bit, but I knew if I stopped, I would never start again. When I saw the finish line, I got a whole new burst of energy and finished off with a sprint.

I finished with a time of 1:57:37 and came in 13th for the women out of 36 runners. I felt so proud of myself! I had achieved my goal to run it in under 2 hours. I am currently training for two more half marathons at the end of 2015. Now I want to beat my first time. Running is something I will never give up on; it means the world to me that I’m 15 and have already discovered what I love. No matter how old you are, it’s never to late…or too early…to find what you love.

Real Runners: I Found My Running Tribe In Track And Field