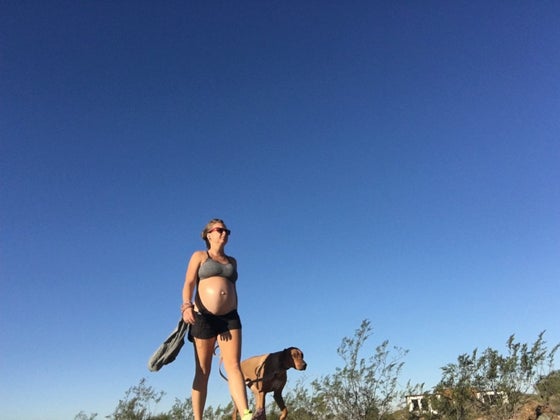 *Courtesy of Seven Wild and Free

Because I can fix a toilet while pregnant and taking care of 5 kids.

Because I decided being pregnant wasn’t going to stop me from getting out and running.

Because running a half marathon at 37-and-a-half weeks pregnant sounded like a fun idea. And it was.

During my pregnancy I ran a lot—mostly alone—tanned my giant belly and made many people uncomfortable with my choices (slack lining well pregnant is an adventure).

Basically, I was setting myself up for a crazy birthing story; and boy did I deliver!

I was pretty sure the baby was coming soon starting on a Wednesday night. I ran on the canal with friends and felt great. I hit 24 miles for the week that night and could not figure out why in the world I was feeling so awesome running. I felt like I could have run more that night and I wasn’t feeling slow at all. Weird. And I ate a decent amount of food after. Even weirder.

Thursday I decided to not run. My legs and unmentionable areas hurt—hello ligaments that loosen for birthing—and I just thought I would give myself a break. I did have moments of sadness wondering if I was squandering my last opportunity to run pregnant, but I distracted myself with cleaning, shopping and cake eating. None of those went well. I found myself beyond annoyed with people, I couldn’t really eat, but I guess the cleaning was okay. Thursday night I had fantasies of eating hoards of food but was too nauseous and just could not sleep. I was alone in the house awake all night and could not figure out what was going on…

…until 3 a.m. I rolled over and thought, I peed myself! Up to the bathroom I would go, back to bed, another I peed myself!, another bathroom visit. In the back of my mind I knew my water was leaking, but I also had a very hard time with the idea of being ‘the girl who cried labor.’ I’ve always waited a long time to call my midwives and really thought I had a good handle on it this time. So I spent the night watching terrible television, trying to eat cake and failing miserably, and taking a lot of visits to the bathroom.

And there was a lot of shorts changing. Because apparently putting a pad on was just not one of my options at that point.

When it was finally a normal hour and the sun was up I decided to go for a hike. First I showered (because that makes total sense). In the shower I was having some contractions, but nothing too terrible. I clearly have time here. I put on new shorts, grabbed my dog Piper and out the door I went. I was too uncomfortable to run, but why not hike in the mountains alone while I’m having ‘mild and irregular’ contractions? I would be fine of course; I had my phone. I talked with the older kids’ dad for a while as he was planning on bringing the kids by for the birth (which was so awesome of him) and he pointed out, “Well, you are talking through the contractions, so you have some time.”

Yes I do, I have time! I texted people, made jokes and figured I would hike 4 miles then head home and have plenty of time.

Am I peeing myself or just leaking?

I actually stopped to pee—I’m not sure why, I wouldn’t have noticed the difference. Luckily, I put on a lot of Body Glide before I left the house. It works for amniotic fluid leaking chaffing protection too! Where’s my sponsorship?

At some point, I was stopping a lot. I could not go up hill while having a contraction so it was dancing or standing still.

I was texting my friend Liz—who I have known for almost 11 years now—and at some point she said, “I am thinking this baby is just going to fall out. Please go home!” Really, that was it. For some reason her saying that made me flip out just a little. Also, possibly that ‘pressure on my bottom’ I was feeling led me to agree to head back.  As I was almost home, I called my midwife.

“Go home and drink something,” she said. “Lay down for 20 minutes and time them; then call me back.”

Home I went (after I finished my 4 miles!) and I tried to lay down. Piper began barking and I had to go bring her inside. I laid down again. I need to make the bed. Contractions. I can’t lay down. Call midwife!

“Because they hurt too much?”

Seth showed up with my daughters Tea and Tru. I was way too worked up to sit and have a conversation with the kids. I felt terrible and I just couldn’t talk through the contractions.

“What? You don’t want to have a conversation with me?” asked Seth. “I’ll take these guys and feed them, let me know how things are going and I’ll bring them back.”

My Mom showed up and all I could ask for was if she would clean the bathroom so I could take a shower in a clean environment after. Priorities!

11:47 a.m. I start pushing, because I am NOT waiting on anyone. It’s important to note I am very disappointed with how terribly I took the pushing. I think there was added stress in the room and, in general, I wasn’t in the head space I should have been in. Instead of working with my contractions, I was fighting everything and making it worse. I also should have eaten more. I mean, I was on the mountain for almost 2 hours. But, he came out! 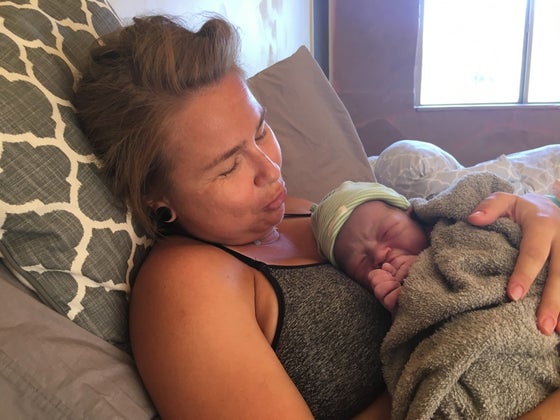 Laboring alone was very odd for me. I was literally on my own and in the mountains until I reached 9 centimeters. I’ve always had people around as a labored but this time the mountains gave me my strength. I spent 2 hours in the mountain laboring and just an hour at home before this little man came into my world. I am beyond thankful.

Read More:
10 Things Any Pregnant Runner Will Understand
How Sarah Brown Trained Through Pregnancy For The Olympic Trials