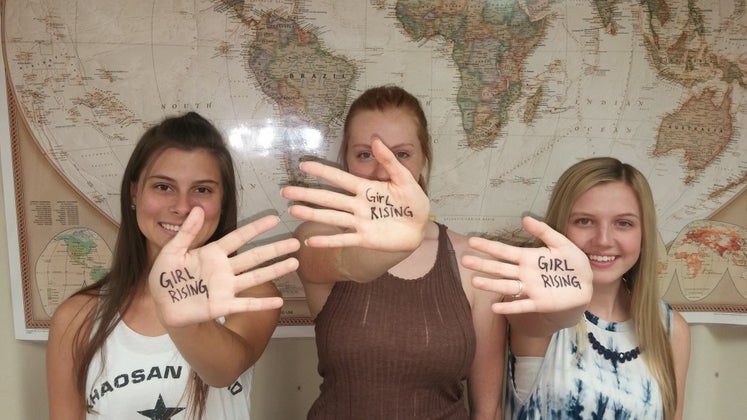 Of the countless reasons to run, raising funds and awareness for a charity you care about is one of the best. When Massachusetts high school student Catherine Grayson learned about the disparity in female education around the world, she decided to take to the streets, sidewalks and trails. In her own words, read how this young runner is changing the world, one mile at at time…

Today, there are 62 million girls who are out of school. That is, 62 million minds’ potential is left untapped; 62 million children unjustifiably facing an elevated risk of early marriage, sexually transmitted disease, and gender-based violence. Education has the power to broaden perspectives and to transform communities into stages of prosperity.

One girl at a time, the world can become a better place. Education acts as an axe to ignorance, igniting love in the hearts of those taught only to hate. According to UNICEF, an educated girl is more likely to stand up for her rights, have children at a later age, and have healthier children. However, she is often seen as a dangerous threat to the preexisting social structure of power. Her voice is ignored, and when she speaks louder it is repressed.

Girl Rising is an international campaign for girls’ education. They utilize storytelling to share the straightforward notion that putting girls in school can lead to incredible change. One of their strongest means of affecting change is through their documentary, duly entitled Girl Rising. The film follows the stories of nine girls with inconceivable strength, who defy the greatest of odds to embark upon their dreams.

A year after first viewing Girl Rising, I started a club at my high school with the goal of raising awareness and support for girls’ education across the globe. We have spread the simple ideology by showcasing Girl Rising at our town’s local community television, and bringing Girl Rising curriculum to ninth grade classrooms. The plight of girls’ education is so much bigger than you, me, or any individual. But be that as it may, a passionate group of like-minded individuals is more than capable of inspiring change that can reach the lives of millions across. the world. So, one day at a time, I try my best to make a difference.

On June 2 , I will continue my efforts, alongside a group of club members, by participating in the United Relay of America. It is the biggest coast-to- coast running challenge in American history. Girl Rising is one of the fourteen causes in partnership with United Relay that groups and individuals are able to run for. My club is one of the groups running the Hatch Memorial Shell stage in Boston. In preparation of the relay, we have been diligently fundraising for Girl Rising. We hope to exceed our fundraising goal, and thus far have reached 95% of our fiscal target. Regardless of if we reach our objective or not, I am vastly proud to have roused the motivations of the twelve young people running alongside me. They are donating their time (and sweat) to a cause that was essentially foreign to them just a year ago.

I will continue working, educating, and raising awareness of girls’ education until the number of girls out of school drops from sixty two million to zero. Such an ambition may seem formidable, and certainly expensive, but when girls thrive, their countries thrive. Books and pencils are far cheaper than combat boots and bayonets, and education empowers in furtherance of human rights and equality. Therefrom I am running for girls’ education to give a deafening voice to those who are silenced, as too many of our world’s youths are rejected because of their gender.