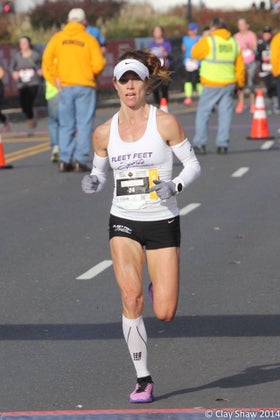 “Faster than a speeding bullet! Able to leap over tall buildings!”

Okay, that’s Superman, but it’s not difficult to compare Superwoman to one of Ohio’s finest female masters runners: Tina Husted.

Forty-three-year-old Husted defies the odds by being one of the top masters runners in the state. On a daily basis, she balances her busy, multi-faceted life; she’s an active release therapist (ART), real estate agent, track coach, artist, wife to the Secretary of the State of Ohio, Jon Husted, and mother to her three kids, ages 20, 9, and 6.

Husted grew up in the small rural town of Bucyrus, Ohio, where her first love was basketball. However, track was also always a curiosity in her life. She was fortunate to be on her high school 4 x 800-meter relay team, which competed in the Ohio High School state finals. She was then recruited by Ohio University’s track program and excelled in the 1,500 meters. Although sports continued to be an important element of her life, she put running aside after meeting Jon, supporting him and his aspirations for a political career, as well as raising their family.

Related: Great Tips For Masters From A Runner And Coach

It wasn’t until 2010 that a simple challenge by a friend to do the Warrior Dash rekindled Husted’s interest in running and fitness. This led to an intense three-year training program that culminated in a personal marathon record in the 2014 Philadelphia Marathon. This proved to be a watershed year for her, with three marathons all under three hours: Philadelphia in 2 hours, 46 minutes, 55 seconds, seventh woman overall, first masters; Grandmas Marathon in 2:47:27, 25th woman overall; and Columbus Marathon in 2:47:06, fourth woman overall, first masters. In addition, the sub-3 superstar had prepared for her big 2014 racing year by running the 2012 JFK 50 Miler, coming in eighth for the women in 7:22:44.

After jumpstarting her running career with an ultramarathon, she sought the advice and coaching of the JFK 50 Miler race director, Mike Spinnler. He helped set the course for Husted’s plan to becoming an elite runner—and not just in the masters division. She believes in incorporating various traditional workouts, such as hill repeats, intervals and the long slow distance runs (LSD), in her training. She also uses shorter distance races as training runs to help prepare her for half and full marathons. She has incorporated the training programs from Jack Daniels, well-known exercise physiologist and author of the book Daniel’s Running Formula, as well as the philosophies of the Hansons-Brooks Distance Project.

That three-year intense training build-up, which culminated in those back-to-back-to-back sub-3:00:00 marathons reaped many rewards and personal satisfaction for her, but she says that her body paid the price for the effort, admitting she broke the “rule” for elite runners: do not compete in more than two marathons in a year. Consequently her 2015 race results suffered a bit, followed by an accumulation of injuries. Things might not always be smooth sailing between injuries, lack of time and life commitments, but Tina’s faith keeps her balanced, as does her family life. Since her husband has a time-demanding job as a high-profile politician, the two of them made a very conscious decision to always put family first.

“It’s a daily commitment,” Husted says of her philosophy of putting in the work to achieve your goals, as well as balancing family and life’s other commitments. “If it means getting up earlier than usual to do your run, then do it. Just get it done.”

While it’s okay to put your long-term goals out there as the “carrot on a stick,” she emphasizes focusing on your short-term goals. Once you achieve those, then those bigger goals can come into focus, and a solid base has been established for you to build on.

Related: This Woman Ran A Trials Qualifier At 40

Her weekly training mileage of 50 to 60 miles per week is where she burns off the stress and excels at her passion (or her “addiction,” as she says) with running at an elite level. It amazes her that in her early forties, her 5K race times are actually faster now than when she was a teenager!

She also came within minutes of the U.S. Olympic Trials Marathon qualifying standard of 2:45:00. After failing to make the trials, Husted set her sights on racing not only the 2016 Boston Marathon, but also the New York City Marathon. With multiple wins at shorter distances from 5K up to half marathon, it seems more than likely that Husted will add a few more victory notches in her race belt before it’s all over. As she keeps running and shooting for new heights, the goals of women everywhere will be raised higher too through Husted’s inspiring journey. She believes that it really is possible to be a truly extraordinary woman—even a Superwoman.

Karl Gruber lives in Columbus, Ohio where he has run the roads & trails for decades, completing 78 marathons, while pursuing freelance writing and his practice as a life coach.