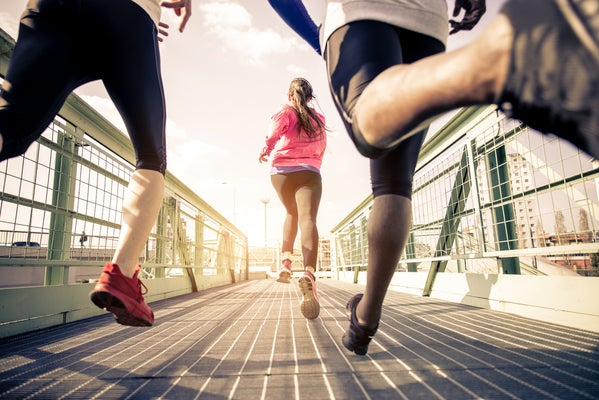 I recently caught myself thinking that thought we’re never supposed to think: I’m not a real runner. Yet I run nearly every day, 3-4 miles during the week and 6-7 miles on the weekend. The conditions don’t matter: I’ve run in subzero winter mornings, in sweltering 90-degree heat with humidity, on days when I was nauseous and near feverish. But I had that thought: I’m not a real runner.

I know better. So why do I still think that?

Well, I suppose it’s because, a decade ago, I ran much more easily, doing hills at a stretch of 8-10 miles at a time and a minute and a half faster per mile than I do now. I think of that time and tell myself, I was a real runner then. And I know plenty of people who run faster and farther and harder than I do.

But that doesn’t explain this feeling. At least not entirely.

I think it’s because in most areas of life where I’m trying to progress and experience mild success, I feel like a fraud. I’m not alone in this. It’s such a common situation that it has its own term: imposter syndrome. Both men and women can feel like imposters, especially when they experience success, but women tend to be singled out more for admitting it. In this, my running imitates life. My perception of myself as a runner is just a natural extension of how I view the rest of my life.

But if running can imitate life, life can also imitate running. It’s why I suspect so many of us keep doing it—running. We start for many different reasons, but the tremendous rewards we reap from running overflow to other parts of our lives.

Related: But What Exactly Is A Real Runner?

This is how that’s worked out in my own life. During one particular high school track meet, I ran a relay event. As I passed my coach, who was checking her stopwatch on the sidelines, she screamed at me in a panicked voice, “MOVE! You’re going slower than your practice times!” I was so mortified, I pushed with all I had. Then I got off the track and checked my time…and realized my coach had lied. I’d actually already been running my goal race pace, but her lie pushed me to run harder than I’d ever run before.

I chalked up that incident as just another funny anecdote about my coach, and forgot about it for years. Then, in graduate school, I found myself floundering. I was trying to conduct research in cancer biology, but everything I’d learned about the theory wasn’t translating into real-life laboratory work. As failure followed pathetic failure, I started to believe I was somehow intrinsically incapable of conducting a lab experiment. I started wondering whether I had the right to call myself a scientist at all.

I picked up running again as a way to distract myself from my stress, and as I ran, I remembered what my high school coach had done. She’d taught me, in that one track meet, that I’m capable of more than I think I can. That even when I think I’m doing my very best, maybe, just maybe, I can do even better. And the only way to figure out if I can is to try.

So I brought that back to the lab. I thought I’d been doing everything possible to get my experiments to work. But maybe I hadn’t. I asked around for advice and received wildly different suggestions from every corner. It didn’t matter; I tried them all. And one day, my experiments came together. They worked. And the next series of experiments worked. Then I picked up a completely new direction and learned entirely new protocols, and it all started to feel easy. In life, as in running, I’d discovered that my best is better than what I thought it was.

Related: You Know You’re A Real Runner When

Maybe you’ve learned that same lesson from running. Or maybe you’ve learned other lessons, like, I thought I wasn’t a morning person, but now I am. I thought I’d forever prefer the couch and a movie to a nightly run, but I like this feeling so much more. I thought it was important to be thin, but now I’m so proud of being strong. Whatever lesson you took from running, you took away the realization that you’re more than you thought you were. In fact, far from being an imposter, you’re not giving yourself enough credit.

I’ve long since left the lab, but I’ll never forget what I learned. As for running, the truth is that I may not be what many consider a distance runner—at least not right now. I am running, though. Ergo, I am a runner. A real one.