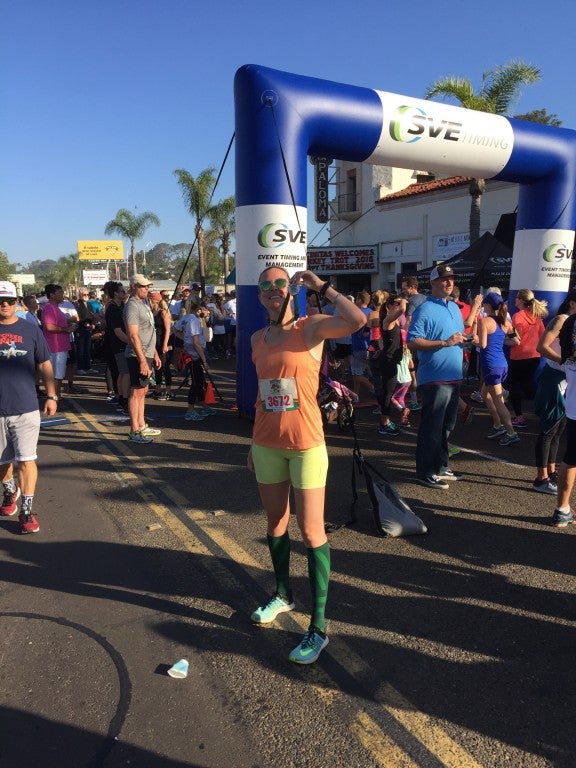 Over the past several weeks, I hopped into something I’ve never really done before: I started training for a half marathon. I’ve physically completed more than 20 of them, but I’ve never put all my eggs into that basket before. The seed was planted with a close friend texted me one day, asking if I would do another season with Team Challenge, the training and fundraising program that raises funds for the Crohn’s & Colitis Foundation of America. They are heading to Rock ‘n’ Roll New Orleans next February, which is basically a no-brainer trip if you want a little Mardi Gras spirit in your life.

So I joined, looked at the calendar and realized, Wait a second—next year is kind of important. I will be hitting my 10-year ulcerative colitis remission mark in September! And so the plan was born: in order to celebrate that tremendous physical win, I will race my fastest half marathon ever. Preceded by more strength training and yoga than I’ve ever done in my life, the goal workout paces have actually come quicker and somewhat easier than expected.

But there are still those moments of doubt, of fear. What if my stomach bugs at mile 10? What if I really can’t run sub-7-minute miles for 13 in a row? What if I get injured? What if there’s a flash flood and the entire course is engulfed in water and I have to swim 13 miles to get back? I had my first test of pushing those ‘what ifs’ aside during my 10K turkey trot race, where I had the goal of running splits all starting with 6:xx (which is basically a massive PR for me). I succeeded at my goal, and it was one of the few times I felt confident in my abilities. It doesn’t mean I didn’t have doubt at mile 5, when everything hurt, but I knew I could overcome those doubts and let them pass. Here were my tricks:

You actually can do it.

Think of a non-running time where you thought you couldn’t do something but did it anyway—wasn’t that awesome!? This is no different; sure, running comes with that whole physical aspect of moving forward even when it starts to hurt, but that’s also the beauty of the sport. That’s also why you train. That’s also why you post on Instagram after a rough workout that you finished it [strong arm emoji]. You did it then, and you’re going to do it now. That’s just nerves talking, and all it is is talk.

A trick: Recite it in your head—you can do it!

I felt so anxious to hit my goal, I felt myself getting too giddy too early, knowing exactly what would unfold if I didn’t chill out. Lower your shoulders, and be patient. With patience comes trust in your fitness; in fact, patience is part of your mental fitness. Waiting for the right moments to strike and not worrying about if you’re going to get it right or wrong helps you get it right. Let the race play out exactly how you planned, and remember that everyone feels great in the first mile.

One thing I know to be true is I still live in fear of the unknown, enough where I push myself right up to what I think my limit should be. Then I hesitate to go beyond, which means I cross the finish line feeling slightly underwhelmed with tiredness. I didn’t do that in this 10K. When I felt good, I teased my legs with a pep in my step to see if I could push my limits a tad farther and faster. Most of the time, the fitness is there—you just haven’t really proved it to yourself. When you get good at being uncomfortable, your limits expand, and there’s a whole new layer of determination available to you.

A trick: When you’re scared of stepping outside of yourself, try it for 10 seconds, then talk to yourself about how you feel after. Is it a reasonable pace? If so, try it again.

Define ‘it’ in that moment.

A runner’s definition of ‘it’ can range from running a fast PR, to crossing the finish line, to negative splitting a workout, to charging through pain, to basically anything that makes them feel good about themselves—and accomplished. So what is your ‘it’? I’ve spoken to many people over the years, and they often say they “can’t do it,” but that two-letter word is basically describing this vague, ambiguous thing they think running is. For me, my big ambiguous ‘it’ was running a half marathon in 1:31 However, instead of fretting over that, I changed my story; ‘its’ became running my fastest workout, to running my fastest 10K, to getting to yoga to stretch out, to still getting a 12-miler in during a storm. Even if your ‘it’ is just running in general, define it more precisely. Running one mile? Running one block? Having a specific goal—bonus points for along-the-way ‘it’ goals—allows your mind to hone in on that one single goal. Add them all up and perhaps over time they might be one big “I did all the its!” accomplishment.

A trick: Which goal scares you the most into thinking you can’t accomplish process goals along the way? That one should be your end goal. Which goal seems attainable today? That is your first ‘it’ goal.