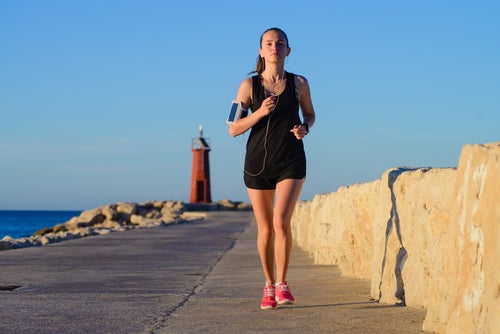 Some of these things feel like a slice out of a horror movie, others are very real concerns, while others are more light-hearted. Here are 10 things one runner says worry her about running.

How often do we see a headline “Runner finds dead body”? Maybe it’s because we’re up before everyone else on running paths through the woods where murderers like to hide their victims. Whatever the reason, I want none of it.

Having a bear pop up on the trail.

It’s not completely out of the question that runners on woodsy trails could come across these creatures. There are a number of YouTube videos and articles out there that prove this is a real possibility.

Needing a toilet ASAP with none around.

For the most part, my system seems to shut off when I run. But there have been a few runs—particularly early on when I was just starting—where I needed the bathroom IMMEDIATELY when I stopped. If that happened in the middle of my run when there were no porta-potties around, I don’t know what I would do.

Any sort of injury that keeps me from the trail.

At some point, you will have an injury that keeps you from running. It will be hard and painful, but there are other activities you can do to stay fit, like swimming, cycling, pool running or yoga.

A snowstorm with three feet of snow.

I used to love snow, and now I have a love/hate relationship with it. Running in a few inches of the white stuff is fun. But several inches or feet of snow is the worst. Three feet of snow and running trails that aren’t plowed could mean weeks of not being able to use the path.

Getting assaulted while running alone.

This is a real problem for female runners—and men—in the U.S. and around the world. I should be able to run where and when I want without needing a running partner to keep me safe. Fortunately there are more self-defense classes available through local running stores that help prepare runners for the unthinkable, should it happen. That’s how one runner knew how to escape her attacker earlier this year.

Having a deer hit me while running.

This is more of an issue for bikers, but it can happen to runners. Take the case of the woman who was out for a jog along a path near a major roadway only to be hit by an airborne deer that had been struck by a car.

All my running buddies getting injured.

I do plan to run a marathon someday, but right now the thought of running 26.2 miles is absolutely terrifying. Even more terrifying are the courses that go far beyond that — up to 100 miles.

Not having enough running shoes and clothes.

There is no such thing as having too many running shoes or clothes. And if you’re going to be running three to six times a week, you need to rotate your shoes and have lots of clothes to pick from unless you want to be doing laundry every day.