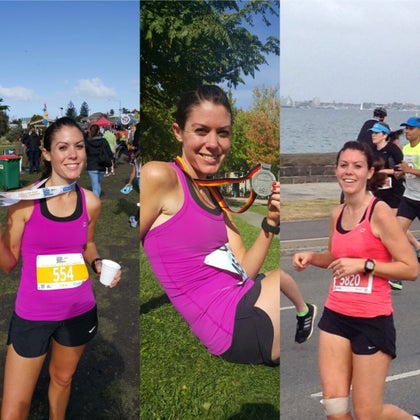 After a dozen half marathons, mainly in Melbourne, I decided in early 2015 that I was going to run my first full marathon, the Melbourne Marathon. Then I signed up for another marathon, and then another and then I realized I had signed up to complete three marathons in just 11 months. I am a full-time high school History teacher and a novice runner, and I had no idea what this epic journey would be like.

Result: 4:12
Lesson: A training log is a guide and should not override what is best for you.

As someone who was completely new to a running schedule and a training log, I became fixated on getting my long runs in. Both of these are incredibly important to be able to jot down what training you have completed; not just running, but any other cross training like yoga, pilates, swimming and gym work. You should also to log how you felt during your training, any injuries experienced and also the temperature, which may have impacted your training.

During preparations for the the Melbourne Marathon, I was far too reliant on my training plan and on one fateful day I pushed this too far. Two days before my longest run (I had planned 22 miles) I developed a migraine and any other person with common sense would have just said, ‘Hey, I still have three weeks until the marathon—I’ll rest and just do it next week!’ Ha. If only.

I stupidly grabbed a maxalt wafer that my doctor had prescribed me forgetting some horrible side effects I suffered from. It cured my migraine and so on Saturday morning I was out the door! For 8 miles I was fine, and then the side effects struck—a bitter combination of nausea and dizziness. I had to ditch the run and walked 6 miles home with no cash or cards, flaring a hip flexor injury that lasted for weeks (and was totally avoidable)!

Ultimately, injuries are inevitable but the important thing is to not let it stress you out (like it did me). Make sure your running schedule has a few weeks extra included to anticipate an injury, cold/flu or vacation.

The Melbourne Marathon was incredibly special as anyone’s first marathon should be, so make it to the start line and smile because it is a great achievement.

Result: 4:35
Lesson: Experiment in your training—but keep it reasonable.

My key mistake with the Great Ocean Road Marathon is that I created anxiety around the marathon. It is longer than a normal marathon at 27 miles, it’s hilly and it has the potential to be really windy (which it was!). I started to get scared that I wasn’t fit enough and needed some kind of super power to get me to the start line. In my anxiety, I became too reliant on physiologists, nutritionists and sports massages rather than thinking about how my body was feeling and what was working for me. I went to a sports nutritionist three times, I saw two different physiologists and I was having a massage every week. How was I meant to know how I felt with all of these different elements influencing my body, mental, emotional and economic state?

Use a long training scheduled to experiment with foods, but remember to listen to your body. I was advised to carb load for two days before the Great Ocean Marathon—and because I didn’t try this in my training runs it led to a GI issue the day before the race, which I would have known had I included this in my earlier training.

Result: 3:50
Lesson: Have fun with your training and avoid mistakes you’ve already made.

In the four months between the Great Ocean Marathon in May and the Berlin Marathon in September, I kept my training really simple—having had made a bunch of mistakes in the two previous marathons. Training for marathons is a great privilege that your body has allowed you to do. I continued to supplement my running with other exercises I love. I did Bikram yoga twice a week, went to the gym twice a week, did pilates once a week and had three or four running sessions a week consistently. The results were fantastic. My body had adapted to frequent training, which meant that my week included multiple days of double training.

Berlin was the marathon I had been working toward; the end of a whirlwind commitment to do three marathons in 11 months. One of the greatest lessons I learnt was to incorporate other races into your training and to use these events to build strength, fitness and confidence in the amazing abilities of your body.