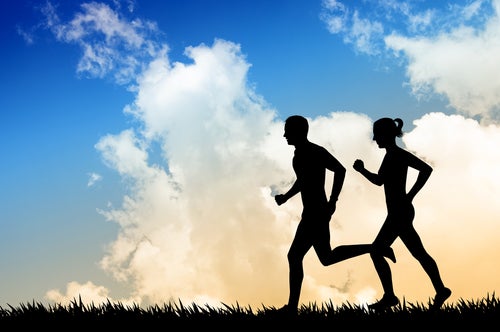 When my husband and I got married almost 19 years ago, neither of us ran. In fact, we had skillfully perfected the art of sitting on the couch, drinking beer and watching Melrose Place (well, I watched. He made fun of it). Over time, I became a runner, then he did. Thankfully, we can find common ground in the odd/annoying/predictable things that runners do. That being said, if I were single and contemplating marrying a runner type, there are some things I would probably not be prepared for prior to tying the knot. Can anyone relate?

You may think you know them very well, until you witness her during or after a run. Snot rockets, farting, frequent bathroom trips—these are all commonplace. This behavior is all very normal in the running world but may be slightly unattractive, disgusting and unromantic to the running outsider.

There will be laundry. Tons of it.

Expect to do double the amount of laundry. Running is messy and often frequent. As a result, the laundry basket will be piled high with sports bras, shorts, tights and socks. You can even expect to find the occasional empty gel packet (nipple chafing, anyone?) that gets inadvertently washed in the washing machine.

You will likely be confused once we start dropping acronyms during happy hour: BQ, DNF, DNS, PR, DFL, LSD, VO2 and PW. A sample sentence could be: I attempted to BQ and get a PR but ended up getting a PW when I came in DFL.

Trauma will come from injury.

At some point, your runner will get injured for some amount of time and be unable to run. This inability will likely result in crying, anger, depression and the urge to punch other runners she sees outside. Do not take this behavior personally.

You might be asked to be her support crew on her long runs (LSD) if she’s training for a longer race. Expect to ride your bike alongside us for 20 miles at 6 mph (that is, 200 minutes, or 3 hours and 20 minutes) while handing off gels, water bottles, Kleenex, tampons and toilet paper.

If you have a foot fetish, you are in trouble.

Your RT will have disgusting feet. She will be covered in blisters and bunions. Several toenails may be missing. You might even be asked to rub these feet on occasion, so be prepared (rubber gloves are helpful).

Should you choose to forgo your biking duties, just know that she will be missing for hours at a time during long runs. If you start to feel lonely, this feeling is completely natural and should subside during periods of taper, recovery and injury.

You may think that running requires only shoes, shirts and shorts—but in this day and age, you might be wrong. There will be watches, race-entry fees, fancy shoes, gels, gym memberships, coaches, PT appointments, massages and fuel belts—just for starters.

Vacations are planned around races.

Most likely almost every ‘vacation’ you plan to take together will have some component of a run involved, whether it be a race, a cool location to log miles or simply a new city to check out on foot.