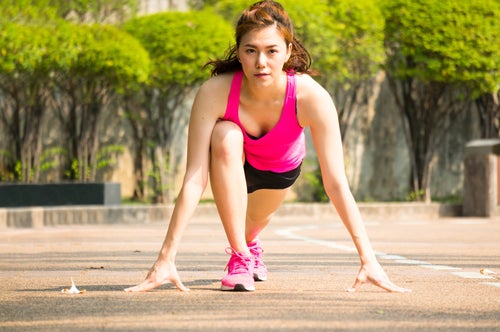 We all have our things we wish we knew before we started running…here are nine from a now-veteran runner.

I remember complaining to my friends that I just wanted to run for 30 minutes without any walk breaks. It took me a long time to get to that point, but I finally did during a series of four 5Ks in four weeks. The races helped motivate me and push me farther. After that, I was able to slowly increase how far I could go without a walk break. About six months later, I was able to do 15 miles.

Related: 4 Reasons The First Mile Is Always The Hardest

When I first started working out and running, I was always in cotton, yoga-style capris and a cotton T-shirt. I never had chafing issues, but I would get hot, and the sweat would stick on me instead of being wicked away as it does with technical shirts and pants. It didn’t take long for the shirts to get gross and me to get the hint.

Races are addicting and fun.

I was never really aware of road races until I got into running, and I was astounded at how quickly the fees added up when I signed up for several in a row. But I had caught the racing bug and wasn’t about to stop. Seeing how I improved over time and challenging myself with each race has been an amazing experience. And running on roads not normally open to runners—plus meeting great new people along the way—has also been fantastic.

Not every run can be great.

It can’t be all puppies and rainbows every time you lace up your shoes. The same goes for races—you can’t set a PR or even have a great race every single time. Learning to deal with the few bad days will make you appreciate the great days even more. Those are the days when running feels totally effortless and you can’t wipe the smile off your face after you’re done.

I got into somewhat of a rut where running was my only major form of exercise. Then I got injured. I quickly had to adapt and find different cross-training workouts so I didn’t go completely insane while I recovered. Now, spin, yoga and the elliptical are all part of my routine. I also want to add in Pilates and swimming more often.

You’re capable of more than you know.

I never realized how much running is a mental sport. If you get caught up in your head, you can talk yourself into believing you aren’t capable of running even a mile, let alone a half marathon. But if you put your mind to it, you can accomplish whatever you set your sights on with a little bit of training and positive thinking.

Music is a powerful aid.

I didn’t run with music for the longest time, and it’s only been in the past four months that I’ve plugged in my earbuds on the run. It’s made my workouts go much smoother, especially since I moved to a place where the paths all run along major roadways. I used my tunes on my last two longer distance runs, which helped me get through the hard parts by focusing on the music in my ears instead of the doubts in my head.

Run in all sorts of weather.

You have to train for what you’ll face on race day. That means climbing hills if the course is hilly, but it also means running in rain, snow, sleet, cold and heat if you want to be prepared. I used to only run on fair weather days and take my runs to the treadmill when the weather turned sour. Now I’m set on trying to do more runs when the weather isn’t ideal, particularly after racing in a sleet storm in early March and a heavy rain two weeks later.

Leaving the pavement for a dirt path is a great way to slow down and get in touch with nature. It also keeps you more focused. Instead of zoning out on your run, you’re constantly watching the changing ground to avoid various rocks, tree roots, stumps and the like. And once you’re away from the traffic passing by on the roadway, you can really hear the birds chirping and find some peace and quiet in the woods.