My best bud Omar and I practicing.

Back in December, I was lucky enough to travel to Negril, Jamaica to run the Reggae Half Marathon. This island paradise is known for its pristine beaches, all-inclusive resorts, and the laid back attitude of its residents. Not too far from those same beaches is a group of kids with big dreams, strong hearts, and many times, bare feet – the Rhodes Hall High School Track and Field Team.

In a country where many people suffer from unspeakable poverty and violence, sport is a national past time and escape, right up there with reggae music on the things that keep this small island nation literally and figuratively running. Jamaican sprinters are the stuff of legend, and plenty of Jamaican kids grow up idolizing runners. It’s kind of a strange concept here in the U.S., where the best runners are barely known but football and basketball players are on a first-name basis.

The first student I met was Rodene, a high school sophomore who competes in the high jump, 800m and long jump. Her shy, quiet demeanor immediately drew me to her; she stood out among a herd of boys running, jumping, and yelling. I soon learned that both of her parents were athletes and that has inspired her to compete. And compete she does – in pretty much everything! Rodene plays basketball, netball, and volleyball in addition to the track and field team, although netball is her favorite. She’s not just strong legs and quick moves though. Rodene was named Student Athlete of the Year and loves studying Math, English, Social Studies and P.E. She hopes to be a professional netball player when she grows up, but after that, she wants to become a teacher.

One thing I noticed about Rodene was that she was not wearing shoes or athletic clothes. As I began talking to Rhoando Parchment, the school’s track and field coach, it became apparent that this was not uncommon. At just 26 years old, Rhoando serves many roles outside of his official duties as head coach. “I’m a coach, teacher, guidance counselor, parent and friend to these kids,” he said. “Many of them live in terrible poverty, and they have witnessed unspeakable violence. Sport is an outlet for them that helps shape their lives and keep them out of trouble, and there is also a real future in Jamaican track and field for some of these kids.”

As we talked, I learned many of the students cannot afford running shoes, so they practice barefoot. The school cannot supply racing uniforms, so Coach Parchment purchased them out of his own paycheck for as many students as he could afford to. “I pay for whatever I can for them. I love being around the kids – they are the best part of my job!” Coach Parchment estimates that 5 or 6 of the kids have a real shot at making the national team in their respective sports despite their limited equipment and gear.

The more I talked to Coach Parchment and the students, the more inspired I became, but few got to me more than Omar. Coach Parchment had talked to me about him earlier and mentioned what a talented shot put and discus thrower he is, but he also mentioned how patient, kind and attentive Omar is to the other kids. Not only does he stand a real shot at making the national team one day, he is also a great coach. How do I know? Because he personally attempted to teach me to throw the discus and shotput while I was there. I say “attempted” because I am a terrible student.

What struck me the most about these kids, and especially Omar, who is incredibly talented, was how patient, kind and humble they were. No one was bragging or trying to show off even though we were there taking pictures. They answered our questions honestly, but without any braggadocio. They were real about their dreams to maybe make the national team in their respective sports one day, but all had goals outside of track and field, too (Omar wants to go to college for engineering, by the way).

While I was standing on the field with these kids, I knew I wanted to find a way to help them accomplish their goals. All I could think about was how much running has given to me personally. It has made me believe in myself more than I ever thought possible and pushed me out of my comfort zone in pursuit of my dreams. Knowing the circumstances that many of these students have faced, I thought about how much hope running must offer them. It is more than I can even imagine! When I thought about how talented and dedicated they are, it seemed unfair that they didn’t have enough money to buy running shoes or could not compete because they didn’t have uniforms, especially when their coach is working so hard and giving so much of himself to help them reach their goals. 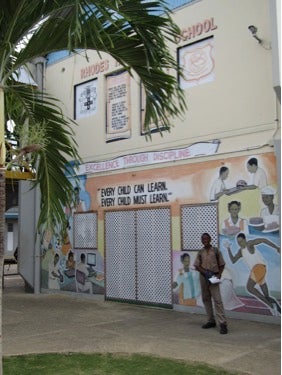 In order to assist the athletes of Rhodes Hall High School with achieving their running and academic goals, I will be accepting donations of new and gently used running shoes, clothing, and gear (including things like water bottles!) of all sizes and colors at:

Monetary donations of any size will be accepted on the GoFundMe page I have set up for the school. All money will go directly to the team!

I really believe not only in these awesome student athletes, but also in the power of running and sport to transform lives! Please don’t hesitate to email me at thetrexrunner@gmail.com if you have any questions at all!