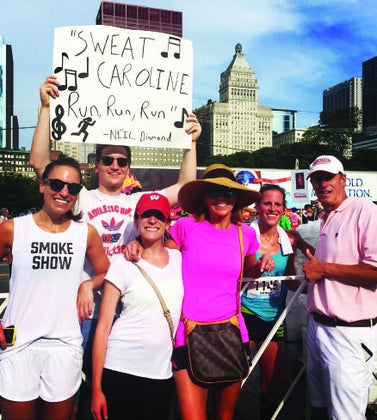 Originally a member of the women’s tennis team at the University of Wisconsin, Bauer switched to the school’s varsity cross-country and track-and-field teams halfway through college. She had never run competitively before, but during tennis practices, she discovered a talent for speed, clocking 5:23-minute miles during workouts.

Despite finding new excitement in racing, Bauer faced battles off of the track. She dealt with anxiety, an eating disorder and over-dependence on a prescribed stimulant throughout college. An injury in her senior year not only prevented her from competing but also heightened these problems.

Related: She’s Doing An Ironman For Her Mother

It was during this time that Bauer found extra support and love from her parents, Laurie and Joe, and made a resolution in December of 2014 to “take accountability for my well-being and to start running again.” She ran the Rock ‘n’ Roll Chicago Half Marathon in July 2015 after recovering from her injury.

“This half marathon marked the ‘finish line’ to the hurdles I faced in college,” Bauer says. “I developed the strength and faith to defeat my obstacles because of my family. My parents give me  unconditional support when I am at my lowest or best, and that is why they are truly my biggest fans.”

The 24-year-old has now graduated with a bachelor’s degree in communication, and she is currently interning at a public relations company in Chicago. For 2016, her new resolution is simply to have a more balanced, healthy lifestyle and to remember to focus on running for fun.

Who’s your biggest fan? Email your submission to editorial@womensrunning.com! Featured entries win a free subscription (or renewal) for you and your fan!

Related: Running Helped One Women Reconnect With Her Father