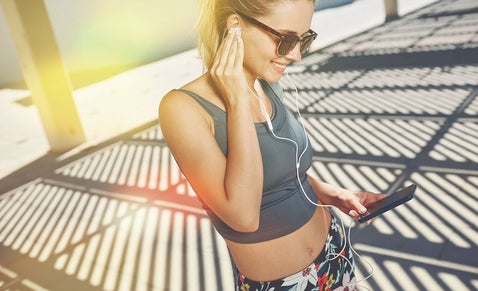 We’ve all been there: You’re in the middle of a run and all of a sudden, your music goes out. And who among us hasn’t, at one time or another, skipped a gym session once we realized we forgot to pack our headphones?

You’re not overreacting—there’s a reason you can’t leave the house without plugging in. Well, actually, there are several reasons.

For one, research shows that music can help you perform repetitive exercise (e.g., running, cycling, rowing, cross-country skiing) more efficiently by synchronizing your movements to the beat. In one study on cyclists, researchers found that those who cycled in time to a musical beat needed 7 percent less oxygen to do the same amount of work, compared to cycling to music with no beat. Why? Researchers suggest music with an easily identifiable beat may provide you with cues that help regulate repetitive movements, making your use of energy more efficient.

To synchronize your running stride rate to the beat, aim for tracks anywhere between 150 and 180 beats per minute (bpm), says Costas Karageorghis, Ph.D., author of Applying Music in Exercise and Sport.“You want to select music that has a meter or beat that’s easy for the ear to extract,” he adds.

Music can also make moderate-intensity running feel easier by diverting your attention from fatigue and giving you something else to focus on. In fact, listening to music while running at a moderate intensity can lower your perceived exertion by 10 percent, according to a 2008 paper in The Sport Journal.

That said, the diversionary effect of music doesn’t apply very well to high-intensity exercise like sprint repeats, when you’re working above 80 percent of your maximum aerobic capacity. At a certain point, even music can’t distract you from the physiological effects of a tough workout (i.e., hard breathing and muscle fatigue).

However, music can motivate you to keep going when you might otherwise call it quits.

“[Music is] a distraction from the routine running,” says Waseem Shami, M.D., a cardiology fellow at Texas Tech University Health Sciences in El Paso, Texas and lead researcher of a recent Journal of the American College of Cardiology study on the effects of music on patients undergoing cardiac stress tests.

Shami and his colleagues discovered that music had a significant motivating effect: Of the 127 middle-aged patients who participated in the study, the half who listened to upbeat tunes during the cardiac stress test lasted a full minute longer—and worked out harder—than those without music. One minute may not sound like a big difference, but as Shami explains, cardiac stress tests can be challenging—even painful—for the patient. While the test can go for a maximum of 20 minutes, most healthy people last 7–8 minutes, Shami says.

But music can do more than pump you up; it can also slow you down.

In fact, new research published in the journal Medicine & Science in Sports & Exercise reveals the type of music you listen to post-run can actually speed up your recovery. Researchers compared the effects of three types of music on recovery following exhaustive exercise: slow, relaxing music; fast, stimulating music; and no music. According to their findings, slow, relaxing music lowers heart rate as well as levels of the stress hormone cortisol more quickly than listening to fast, stimulating music or no music.

Karageorghis offers one possible explanation for this: entrainment theory. According to entrainment theory, bodily pulses such as heart rate, breathing rate and brain waves can be drawn into a common oscillation with the rhythmical qualities of music. For example, listening to a moderate music tempo (i.e., 115–120 bpm) in between high-intensity intervals may help slow breathing so that it’s less shallow, which will, in turn, lower heart rate more quickly, re-oxygenate the working muscles more effectively and reduce the amplitude of brain waves that are associated with high levels of fatigue, Karageorghis says.

So switching to soothing tunes immediately after your run might jump-start your recovery. Your best bet: music tracks that descend in tempo from 90 to 60 bpm. Karageorghis suggests cooling down with music by artists like Enya and Enigma.

It’s tempting to turn up the volume when you need to grit through a tough interval but try to resist the urge. The time to focus on your run is when you’re exercising at a very high intensity (above 80 percent of your aerobic capacity), which is hard to do if you’ve got Nicki Minaj pumping through your headphones. That said, you can still use music with motivating lyrics to help psych you up before those hard sessions, Karageorghis says.

Shuffle Your Playlist Every Two Weeks

According to Karageorghis, there’s an inverted-U relationship when it comes to music exposure: You like something increasingly the more times you listen to it, but then it becomes an inverse relationship and you begin to dislike it more and more with each exposure.

Fill your strength-training playlist with songs between 70 and 120 bpm, Karageorghis says. For reference, Missy Elliott’s “Get Ur Freak On” clocks in at 71 bpm, while Lady Gaga’s “Bad Romance” is 119 bpm.