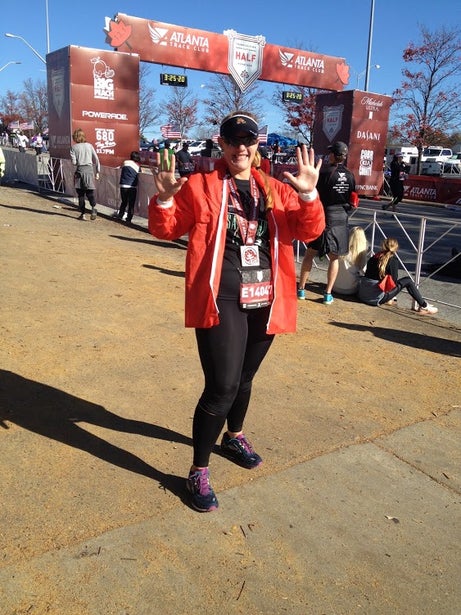 And that is, patience is a virtue when you’re enjoying the process. One runner shares her journey here.

I run…because I love my body.

Throughout my life as a kid, a teenager and even a young adult I struggled with my weight. I was large—I mean large as in reaching-almost-300-pounds large. I listened to everyone’s jokes and hateful words about me as I was growing up but I never really let them bother me. I always knew there was so much more to me than just my weight.

Finally one day in college I began to exercise and enjoyed the feeling it gave me when I was done. After a few years of taking aerobic classes and using the cardio equipment in the gym, I got bored. The weight that I did lose began to come back and I was stuck in a hole again.

Then one morning I woke up and decided I was going to go for a run. I certainly didn’t have the body of a runner, nor did I know the mechanics of running. In fact, I didn’t even know if I could do it. I went to the closest park and I just ran as long as I could. It was about a minute or two. Then I would walk for a while and when I got pumped up by another upbeat song, I would try it again for a minute or two. I did this day after day until I realized that I was running for 10 minutes, then 20 minutes, and suddenly I had reached the point that I could run a 5K.

Now by no means was I fast. I was trotting my feet one after the other in hopes that I wouldn’t fall flat on my face. But this is what they call running! Soon after, I signed up for my first 5K race and realized how awesome the running community really was. It was not made up of all tiny, skinny people. There were actually several women just like me. I continued on my journey and ran a 10K race, then a 15K, then a 10-miler. Also? I just completed my 10th half marathon! In February 2016, I will take on my first full 26.2 miles, and I cannot explain my excitement. Each day I am ready to get out of work and hit the road for a training run!

You are probably wondering if I did all of this at 300 pounds, and the answer is no. It has been three years of training and I have lost close to 100 hundred pounds. However, I am still by no means fit the image of what people think of as the “stereotypical runner.” All I know is that it took me almost 35 years to reach this point and I can truthfully say that I run because I love my body. And it takes a loved body to get you to the finish line!