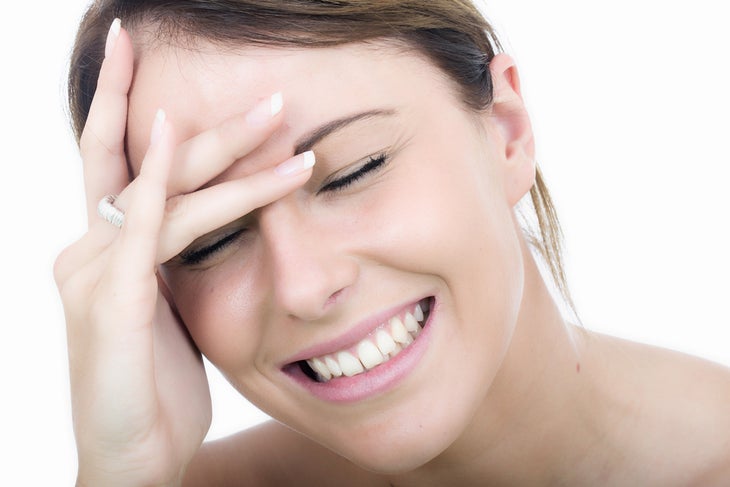 It’s the middle of the week and we could all use a chuckle. Thankfully our readers have come through. We asked our readers to share their most embarrassing moment on a run. Remember—we’re not laughing at you. We’re laughing because we have done at least one of these things too.

We asked: Fess up: what’s the most embarrassing thing that has happened to you on a run?

Aja Henriquez: Wore a super woman tech shirt one day on a run. Tripped on a raised sidewalk and took flight in broad daylight. I literally flew and landed with a big plop. A few cars slowed down but none stopped.

Dale Marie Chisholm: On a group run, I had to pee. Stopped into the woods and ended up with those prickly little balls (we call them bird ox here) all over the inside of my running shorts. My running buddies helped pick them off…..but it wasn’t a pretty sight.

Lindsay Selinger: This is so embarrassing but lately it has become a joke with my close friends that know about it. I over-hydrated the day before a half marathon. By mile 4 I could feel it and I couldn’t stop it… I peed my shorts. I tried so hard to hold it in but couldn’t. It happened more with each step. Somewhere between mile 5 and 6, I just gave up and let it happen. Luckily I was in black shorts and the race was in Houston. Everyone was sweaty from the humidity and didn’t notice. Those port-o-potties are so gross, I really chose to pee my pants than use one. I got such a great time that I didn’t mind the embarrassment of my boyfriend having me sit on a blanket for the drive home.

Related: This Product Will Save You Some Embarrassment

Cara Stone: Tripping & falling down – 4 times over the past 8 yrs. Had to finish a 20-mile training run w/blood dripping from my left elbow & running down my left shin.

Robin Black: Snot bubbles while trying to say hello to a passing runner.

Erika Bthatsme: Ha! I was running in the heat in Griffith Park in LA wearing a white running tank. Poured water over my head to do the last few miles. Jay Leno drove by in one of his classic cars. I waved (just cause). He stared at me like I was a freak. When I got to the car I noticed my shirt had gone… transparent – with the water. Wet T shirt style. Oh my.

Kristina Odom Saravia: I very recently fell off of the treadmill and wasn’t wearing the safety clip so I was jammed in between the wall and the moving belt. My knees, wrist, and hand all were burned raw. One knee even had the tread imprint. Had to do a barrel-roll to the side to be able to stand up. Glad I run outside 99% of the time… the ground won’t continually hurt you if you fall!

Elizabeth Bates: First race after baby, as soon as I crossed the finish line my bladder just gave up. I just kept right on running until I got to the bathrooms where I jumped, fully clothed, into the shower so that I was equally as wet everywhere. At least it was a PR!

Dena Kuster: Having to poop and the only thing that I’d let go of to wipe was my sports bra, so removing layers becoming 1/2 naked on the trail. I felt so much better and continued on!

Dawn Owens: Once on a timed run for a physical agility test I swallowed a bug and peed a little. Still made it.

Laura Martin Gamboa: Mother Nature paid me a visit, 2 weeks early, during a 10K. I really don’t like that B!

Related: What Happens When Your Period Arrives On Race Day

Carrie Dorfield Sheckells: Ran into a fire hydrant during a road race. Only 1 person asked if I was alright.

Jill Ackerson Heinen: Had to pee. Utility worker came out of nowhere. He did a nice job of pretending not to see me.