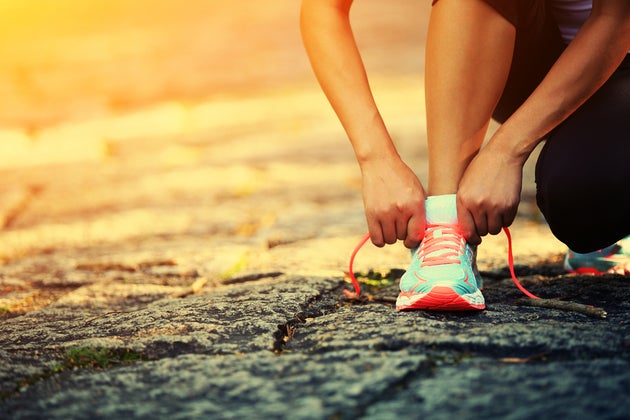 I’m not a morning person. Okay, I’ll amend that slightly—I’m not a super-early morning person. Waking up at 7 a.m. or so suits me just fine, even on the weekends, but 5 a.m.? Earlier? Groan. I struggle endlessly with knowing that I should run in the morning while simultaneously hating the idea. I’ll admit—it’s the easiest way to ensure that I get my runs in and a fantastic start to the day…if I can force myself out of bed. And that’s a big “if.” In fact, developing the habit of running in the morning looks a lot like the five stages of grief, at least in my world.

Step 2: Anger. WHY DO I HAVE TO WAKE UP EARLY TO RUN? My husband doesn’t have to wake up early! The sun isn’t even out yet! It’s freezing! Ugh, this is the worst. I’m not doing it. I refuse. I’ll just quit running. Yes, that’s a good idea. I’ll quit.

Step 4: Depression. The world is dark (literally) and I am doomed to an existence of waking up before the light for the rest of my days. I have chosen a sport that will torment me with exhaustion forever. I must give up on the idea of ever feeling well rested again. There is no hope.

Step 5: Acceptance. Okay, you know what? Waking up early is not so bad after all. Yes, I’m tired, but I get to do the sport I love! I never have to worry about something coming up and stopping me from running because I’m up and at ‘em before the rest of the world has a chance to stop me. I feel great knowing that my workout is done before most people are even awake, and I start the day on a positive note. And hey, now I’m used to running early, so race day is easier! Yeah, I think I can get used to this running in the morning thing. It’s not so bad after all!

Related: Wake Up Early: How You Can Do It