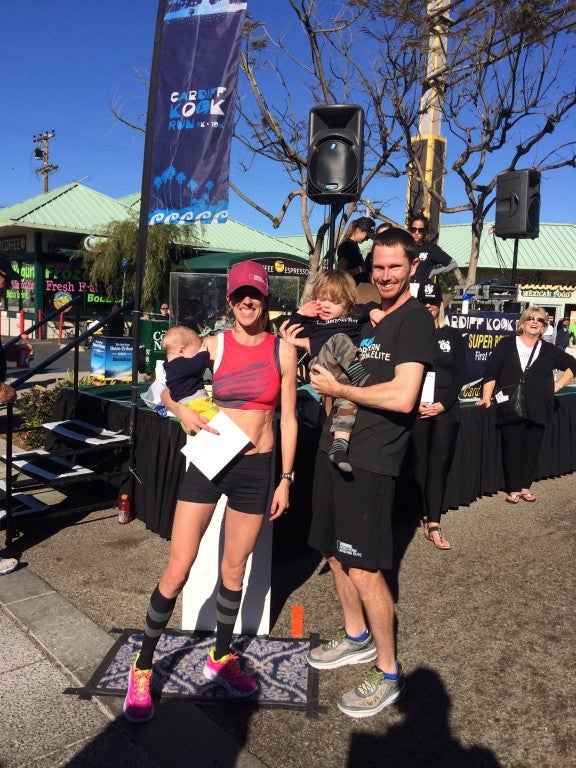 I’m almost 5 months post-partum and just ran my first competitive race since 2013. I ran the Cardiff Kook 10K and won in 33:44. I experienced a moment on Sunday that I had been missing for the last two years of my life: self-doubt.

Standing on the starting line, I reflected back upon my last race in July of 2013. It was the Utica Boilermaker 15K, and on a hot, humid, muggy morning I found myself in a pack of eight East African women racing down the streets of Utica, NY. These women were some of the best in the world (one had bests of 14:55 for 5K and 67 minutes for a half marathon). They outclassed me on paper—in PRs and stats. But on that day I raced like I belonged there, getting dropped from the pack and surging back a mile later. I finished sixth in 51:26, 50 seconds behind the winner. Then I got pregnant three months later, and my running career has been on the back burner since.

Related: One 5K Changed The Game For Stephanie Bruce

My return from my second pregnancy has gone smoother than my first. Why? The learning curve. There’s no cliff notes for coming back from a baby, and most of it is trial and error—two steps forward, one step back. The positive of having two babies so close together is the process was so fresh in my mind. The negative was my body experienced far greater trauma—stretching, loss of muscle strength and stability— and now I have to chase a toddler around while raising the newborn. However I also have an army of help. We are fortunate to have a great childcare situation for Riley and found a few amazing babysitters that have worked around our schedule. My team of chiropractors and massage therapists have worked with me weekly to figure out my biggest weaknesses and focus their efforts on strengthening those. Work began with my very intrinsic core muscles the first few weeks postpartum, and as I grew stronger, we targeted the large group of muscles that contribute to core stabilization and general hip and glute strength.

Unique to any of his other athletes, my coach, Ben, met with me weekly, starting from about six weeks postpartum to 12 weeks so we could approach training at a very gradual progression. Yes, we had to take many steps backwards in order to keep a minor setback from becoming major. He asked me about my “life stresses” outside of running; I think those get pushed aside when women are trying to return to training after childbirth. For example as I started to get pretty fit around 15 weeks postpartum, Hudson entered the dreaded four-month sleep regression, and I went from getting five- to six-hour stretches of sleep to waking up every 90 minutes. It was an exhausting few weeks, and I had to back off training to keep from tanking or getting injured. I rode out the storm and after a few weeks he started to sleep better, and I, in turn, recovered better.

So how did I get to racing five months postpartum and have the result I did? Part of it was a surprise to me to be honest. The other part is since running is my career and my love, my motivation to do all the little things to stay healthy and train was very high from the start. Sure—I had days where I was in a fog of sleep deprivation, but I tried to nap most days at least 30 minutes when the baby slept. I also have the luxury of running being my job, so my time management and flexibility allow for a schedule centered around being a full-time athlete while also being a full-time mom.

I still approached the actual training in a conservative manner (for me). 1) I averaged about 60 miles a week for the last six weeks, compared to a normal 90-mile average before babies. 2) I took a day off every seven to 10 days and shortened a run if I had pelvic or back pain that didn’t go away. 3) No matter how busy I am, I eat something (anything) within 30 minutes of finishing my run. That part is huge in your overall recovery. 4) Lastly, I believed. I had run performances before children that made me believe when I came back, chasing fast times and the chance of making an Olympic Team was still in my wheelhouse. Yet in the moments standing on the start line at the Cardiff Kook Run, I experienced that self-doubt that anyone who has been away from racing for years would. But as soon as the gun went off, the feeling floated away, and the confidence I felt at the Boilermaker 15K came back. I belonged out there again; it became a race against myself.

Here’s how it played out. Canadian runner Natasha Anzures took the lead and I was about four or five seconds off her coming through the first mile at 5:23. (You never actually run race pace for very long intervals when training at altitude, so this would be the first time my body was running 5:20s for longer than a few minutes.) The course runs along the coast, so mile two dropped gradually; I clocked 5:21 for mile 2. I was feeling the rhythm now, controlling my breathing and telling myself to run strong and relaxed. A slight breeze from the ocean was blowing in and cooling the 70-degree morning sun. Natasha was still about five seconds ahead of me, looking strong. As we approached mile 3, I  began to feel a pep in my step and I decided to go with it. She seemed to be struggling a bit, so I felt this was my chance. I caught her around 5K and put in a surge as we rounded the U-turn for the final 5K. I was ready to start pushing the last half of the course as it climbed back up the highway. Mile 3 was also 5:21, and as I pushed to mile 4, the pace dropped to 5:19.

With the course being an out and back, the entire last 3 miles I was running by the runners who were still heading out. This feeling was electric. They were in their own moments yet cheering and encouraging me as I climbed the grinding hill to mile 5—5:38. By now the “racing hurt” was very much back, and I welcomed the pain with open arms. As I crested the hill I could smell home and knew I had just over six minutes of running left. I wanted to high-five every spectator in that last mile so they could feel the joy I had simply from being back out there racing. I also wanted to keep running as hard as I could to display my fitness. Hearing the announcers, I checked my form, said, “Run tall, pump your arms,” and crossed the finish line after a very long journey. It wasn’t just a 10K—it was years in the making.

To those women who affectionately called me “not human” and “superwoman” after running this five months post-partum, you’ll take solace (or a good laugh) in this. As it is my journey to “keep it real” and remain transparent with my audience, I must share how the last mile of the race really shook out. I’m one of those “blessed” women who get their menstrual cycle back while still breastfeeding. So three days before the race, I got my period. No problem—I’ve raced on my period before. Yet any woman who’s had children know there’s a bit of stretching and loosening that goes on, and let’s just say tampons don’t hold as well as they used to. Sorry to those reading if its too much info. I reached back at mile 5 to wipe sweat off my butt and returned with a bit of…red on my hand. I looked down, and yes, my thighs were covered, as was my—luckily—red Oiselle uniform. So if there’s not enough to think about the last mile of a race, I had to try not to focus my attention and let embarrassment of this happening overcome me. So I kept running hard to the finish, crossed the line and immediately found my husband, Ben, and asked for his jacket to tie across my waist. I’m being approached for post-race interviews and using baby wipes to clean myself up. Keep it real, ladies!