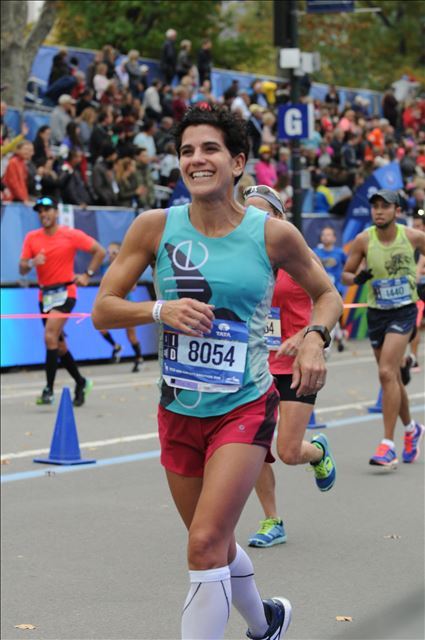 “Congratulations!” was something I heard a lot after finishing the NYC Marathon. I had pictured receiving this kind of post-race praise with a huge smile on my face, as moments from the epic race flashed though my head. Instead, I gave half-hearted smiles and replied with something like, “Thanks, but I didn’t do as well as I hoped,” as I thought about the suffer fest that was the last eight miles, when I slogged my cramped and hurting body to the finish. Whomp whomp.

I’m proud to say I finished the race with a big smile, determined not to rob myself of the joy of finishing one of the most iconic races in the world, but my attitude post-race had me staggering though many stages of self-pity.

If you find yourself feeling low in the days and weeks after a missed goal, knowing what to expect may help ease you out of your funk—and back into your runner’s high:

An odd first stage, I know, but one you will experience nonetheless since you will be elated to have simply crossed the finish line. You were quite positive it was never coming.

You may burst into tears approximately 10 seconds after the “euphoria” wears off. Let the tears flow and have the gawkers think they are tears of joy, since most non-runners cannot fathom anything but happiness upon the accomplishment of finishing a race.

You will question everything from your training technique to fueling to your underwear and shoelaces. Most likely it was the fact that your bib number really was unlucky. This will obviously lead to stage four.

In trying to pinpoint where you went wrong and how your body could have betrayed you so badly, you may fall deeply into “if only” thoughts. If only I had trained differently, wore more supportive shoes, wore my compression socks, ate that new gel, wore less supportive shoes or went to bed at 9:51 p.m. instead of 9:52 p.m. None of those things matter, but the head games in your brain will continue until you reach stage five.

If you’re thinking stage five is way too fast to find happiness again, you’re right. You’re only happy because you’re drunk. Enjoy it.

You will contemplate never running again (especially since you’re hungover from stage five) until you see the spring line of running apparel and gear that you obviously cannot live without, nor can you justify buying if you’re no longer running.

Stage Seven: Signing Up For All The Races

You will want revenge. It is understandable and possibly the right thing to do. Just think very long and hard before you register for the Death Valley Ultra or the Mount Washington “race,” which has 4,650 feet of vertical gain. Choose wisely.

You are certain you can put your running skills to better use in bowling, canoeing, knitting or curling. Basically anything but running because you obviously suck at that.

You will not be angry at yourself, but instead with most everyone around you for not understanding your feelings. You will wonder why they cannot see how your months of determined and disciplined training, which led to you finishing your goal race, has obviously become your worst nightmare. Don’t they know the massive importance of the time clock?

You realize you did something only very few people can claim they have, despite what your social media feed shows. You finished a race and you have the mental anguish to prove it!

Why Goal Setting Is The Hardest Part Of Running

Allie is happiest when sweating or writing. She is a competitive athlete on Oiselle Team Voleé and has represented Team USA in duathlon competition.  When she’s not running, swimming or biking she’s writing her health and fitness blog VITA – Train for Life.  Allie lives in the Northeast with her husband and twin boys, desperately trying to make gentlemen out of them all! She can be found on Twitter, Instagram and Facebook.