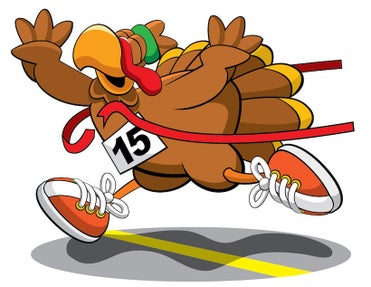 Reflecting On My First Turkey Trot

Thanksgiving is a unifying holiday in many ways. Aside from the joy of family and friends (and food!), it’s also one of the most popular running days of the year. Hordes of Americans lace up their shoes and run in local turkey trots. These races have become something of a “pre-feast” endeavor, a way to balance out the evening’s consumption.

That wasn’t the purpose of my first turkey trot, nor was family fun. When I registered for the 2009 GameDay 5K, it was for redemption. My ninth grade cross country season had been less than stellar and I was less than happy about it. I wanted— needed—a valiant comeback. Or so I thought.

Related: 3 Words That Matter Most When Racing And Training

Honestly, I didn’t want to race. My muscles were tired and it was a cold day. But pride goes before the fall, and I was a prideful, plummeting mess. I had no choice but to stake my athletic worth on this last-ditch attempt for 2009. “You’re so much better than all these pedestrian runners,” I told myself. “You are going to prove yourself to everyone.”

It sounded simple, but five kilometers later, I was swallowing those words and the urge to start sobbing. Much to my surprise, I’d run just as poorly as I had in my last race of the season. It was, in my eyes, a complete failure. I did what any high school kid does after a bad race: I sulked in the corner while my dad and brother waited for the awards.

I was filled with anger and shame after that race. It had been the perfect chance to prove myself, and I hadn’t. Yeah, it was a rough Thanksgiving for me. But as I reflect on that day now, I’m incredibly grateful. What I saw as a crushing defeat was actually redemption–it just looked different. It didn’t come in the form of a trophy or a PR; instead, it was a liberation from the slew of expectations I’d placed on myself. I had, in a sense, regained my freedom to fail.

That wasn’t the last time I misplaced my identity, or reeled in the wake of failure. However, it was the first time I acknowledged the relationship between the two. The more of my identity I placed in success, the more crushing the defeat. Conversely, the more I ran without self-imposed pressure, the easier it was to brush off a bad performance.

Turkey trot or not, that principle remains. Running can’t be our identity, and neither can personal records or victories. Why? Because they fail. And we fail. What really stand the test of time are humble spirits and optimism. So I ran a crappy race that day. Big deal. My family still loved me and I was still a talented runner. I didn’t get a PR, but I did get a free t-shirt and a valuable lesson.

Sometimes, redemption doesn’t look the way we think it should, and that’s hard. But eight years later, I’m more thankful for the freedom I regained that day than I would’ve been for a trophy. Award or not, I have many things to be grateful for. More and more, I’m realizing that failure is one of them.

Everyone Should Stop And Take This “Less Is More” Challenge

5 Things You Should Know About Running Mind Games