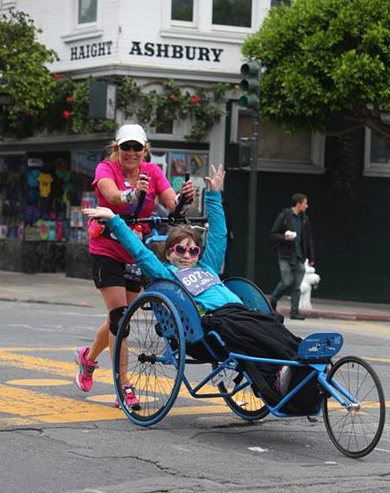 “When you fall stand up, when you break stand tough, when they say you can’t, you say: I CAN.” —Stephen Cooper

As we we were planning our 2015 Team Ari race calendar, I enthusiastically shared with Michael, our loving husband, father and crew chief extraordinaire that Ari and I wanted to race the San Francisco Marathon. “You can’t do San Francisco, you won’t make it up those hills pushing Ari. And the downhills—well, they will just be too steep for both of you. I know you’ve raced over 40 events, but Kelli, that course is too hard,” said Michael. Now mind you, Michael is our biggest cheerleader and supporter: the voice of reason, carefully planning to crew us at every race. We trust and value his opinion, but sometimes a girl’s gotta do what a girl’s gotta do! “Remember we don’t use the word ‘Can’t’ in our house,” I quickly retorted. Ari and I glanced at each other and with a twinkle in our eyes we secretly began plotting. In an instant we knew it was RACE ON!

I registered us both for the San Francisco Marathon the next day.

As we headed to our assigned corral, I looked over at Ari in her race chair and she no longer appeared to be a petite, small framed teenager: she had evolved into a strong female athlete ready to take on the San Francisco Marathon like a champion. I was suddenly filled with overwhelming emotions. I attempted to gain my composure, but memories from the last nine years came flooding through my mind like a tidal wave. Five months of hard training quickly passed by in 2015, and we found ourselves walking to the Embarcadero. It was pitch dark out, but the streets were illuminated by the brilliant lights from the Bay Bridge. The city would soon be awakened by the sounds of 26,000 athletes’ footsteps pounding the pavement as we ran towards the majestic Golden Gate Bridge on this glorious Marathon day. In the distance I heard the theme song from Rocky playing. How inspirational is that?!

You see, Ari is much like any other 16-year-old. She loves watching The Voice, playing video games, and searching YouTube, except she was born with Cerebral Palsy and Visual Impairment. As a mom, I watched her endure years of physical therapy, braces, and botox, persevering through many medical challenges. Her struggles made me realize that my body was capable of so much more.

So, I made a promise to myself 9 years ago that I would no longer take my body for granted.

It was on a cold winter’s day in a therapy clinic surrounded by a dozen physical and occupational therapists when I watched in eager anticipation as my almost 6 year old daughter took her first unassisted step. Amidst all the clapping and high fives there wasn’t a dry eye in that room. That was all the motivation I needed.

The next day I laced up my running shoes. I started to run with Ari’s older siblings who were teenagers and running soon became our family therapy. The added bonus was that no one had to endure Mom’s dreaded car therapy anymore! But for years, Ari patiently sat on the sidelines always asking, “How many miles did you run?” and “What did you see on your run?” Later those questions turned into “When can I run with you?”

In 2012, Team Ari rolled into existence as we were able to race our first 5K together. I pushed Ari in her wheelchair. Ari loved running and found a sense of freedom she hadn’t experienced before. As we crossed the finish line, she raised her arms up in a victory pose and before I could catch my breath said, “When can we race a marathon?” As I fought back tears of joy, Ari exclaimed, “Mom, running makes my disability disappear!” 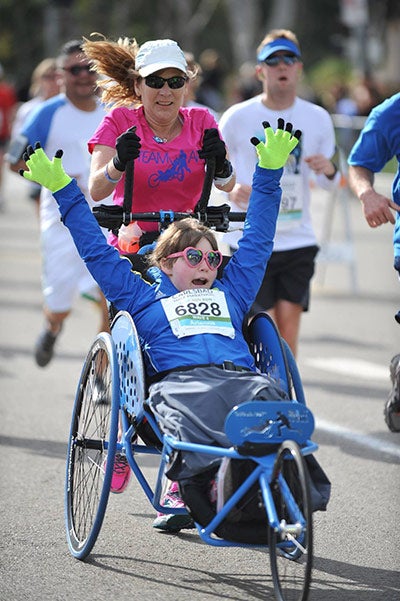 Fifty-two races later and we are still running together as a mother/daughter duo. Thank goodness Ari was stubborn and never stopped asking to run with me! I look back and remember all the days I laced up my shoes, closed the front door and ran without her. Never because I wanted it that way, but because we didn’t have the appropriate equipment. Those days were not nearly as fulfilling as they are now.

Ari was the reason this middle-aged mom even started to run. Because of her inspiration, courage and determination, I was able to step outside my comfort zone and try.

Together, we’ve run through middle school and high school years. We’ve shared many mile markers. We’ve run through good times and bad, triumphs and tragedies, and it made us a stronger, closer, and happier family. No matter how many times we toe the Start Line, we still get goosebumps. We are always inspired by the outpouring of encouragement, support and positive vibes. We’ve met and shared the road with extraordinary individuals. We’ve high-fived the elite athletes and crowds at the finish line. We’ve spoken with runners just starting their training and setting goals to finish a first race.

It’s not easy. Some days may be harder than others. So be prepared for when Plan A fails to kick the sh*t out of Plan B. Self-doubt may creep in at times. Others may doubt you. Just remember, When they say you can’t, you say “I can.” I know that pushing myself and Ari (literally) is a labor of love worth more than any medal I can earn on my own. It requires a bit of strength, courage and a big dose of teamwork. Our mantra is “Yes We Can Cross Any Finish Line!”

We know you will cross your finish lines too. We are so grateful to run the San Francisco Marathon together again on July 31st, 2016. See you at the Start Line!

Team Ari is a mother-daughter duo comprised of Kelli Tanghe and Arianna Tanghe. They compete in endurance races across California to raise awareness for the inclusion of physically challenged and assisted athletes.