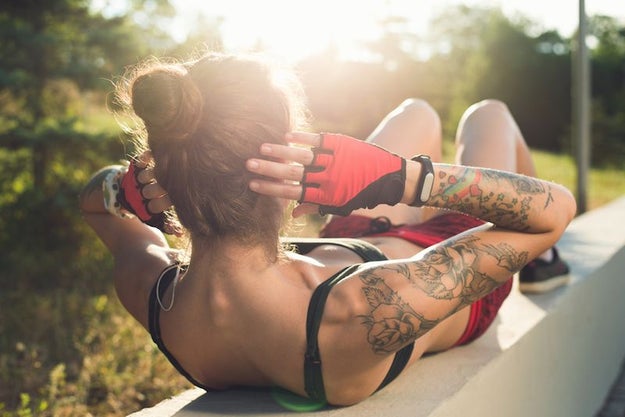 For the most part, we know what’s up with tattoos: some look cool, some look silly, and almost all come with a unique story. We also know that younger people are more likely to ink, with a recent estimation suggesting that 40 percent of Americans aged 26 to 40 sport at least one. But there are some things we just don’t know yet about tattoos, including the extent to which they impact the way we sweat. A new study shows that tattoos may affect the efficiency of our skin’s built-in cooling process. Though tattooed skin produces sweat, it does so at about half the rate of non-tattooed skin—and with nearly double the sodium levels.

Related: Is Everything We Know About Salt Wrong?

Researchers at Alma College in Alma, Mich. published the results of their findings in Medicine & Science in Sports & Exercise last month. Led by Professor Maurie Luetkemeier, the small research team gathered 10 subjects (each a young, healthy male) with tattoos. Two patches containing a sweat-inducing chemical (pilocarpine nitrate) were placed on each subject: one covering a tattooed section of skin, the other on a related tattoo-free zone. (For example the patches were placed on opposite shoulders of the same subject, or on opposite calf muscles, and so on.) After initial exposure to the chemical, the researchers replaced it with small discs that collected the subjects’ sweat in the 20 minutes that followed.

Once the 20 minutes were up, the researchers determined that the subjects’ tattooed skin produced roughly half the amount of sweat with nearly double the sodium levels of the non-tattooed skin. Luetkemeier’s team also deduced that the age of the tattoos didn’t matter: older tattoos had just as significant an impact on sweat production as newer tattoos.

Though this early study is eye-opening (especially for professional athletes, among whom tattoos tend to be popular), further research is needed to determine whether there is a difference between perspiration that results from physical exertion and the chemically-induced sweat that was produced for this study. Additionally, future studies will need to determine how age, gender and other health considerations might influence perspiration levels. Few have studied the effects of tattoos on sweat production, so this is all we really have so far–but it’s an insightful start.

Lactate Is Linked To Cancer Prevention In A New Study

A New Study Explores The Risks Of Ibuprofen For Endurance Runners

Why Ladders Are The Best Interval Workouts For Runners