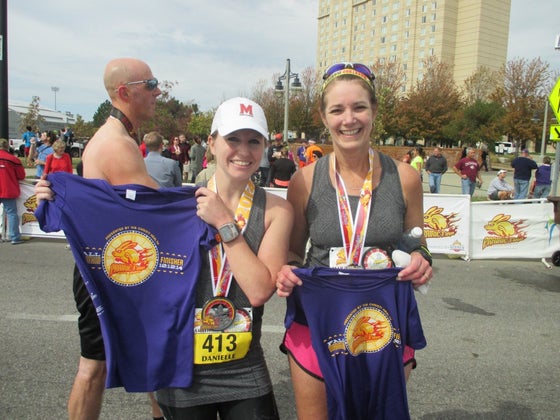 On October 12, I ran my first marathon since having back surgery in April. To say that I was undertrained and nervous would be the understatement of the year. I vowed on my blog to only think positive thoughts about myself in the week before the race. I wanted to celebrate my accomplishments (the fact that I was running a marathon at all), not worry about my finishing time (because who really cares besides me?) and to focus on the fun I would have with my friends. Even though negative thoughts did try and creep in during that week before the race, I stomped them all out and only thought happy, self-affirming things.

Fast-forward to race day. I cross the starting line feeling positive. Mile 3 comes, and I’m positive. Mile 8, positive. Mile 16, positive. As the miles ticked by, though, I felt that I could not keep up the positive thoughts. I could not tell myself things like “This doesn’t hurt! I feel awesome!” because I did hurt and I did not feel awesome. While my running buddy did a great job of staying upbeat  (she is one of the most upbeat people ever anyway), I did not.

What I realized, though, is that while positive thinking is great, it isn’t entirely necessary. I found that being realistic and honest with myself in those later miles was equally important. For example, when I tried to think, My legs don’t hurt at all! I would just get annoyed with myself. It clearly wasn’t true. What I said to myself instead was, Ok, my legs are getting a little tired. Of course they are getting tired—I’ve run 20 miles! Are they more tired than they should be? No. Am I in pain, like an injury? No. Ok, keep running!

This continued over the last 10 miles of the race pretty regularly. For someone reason, acknowledging the fact that I was in pain, a little grumpy, and ready to be done made me feel better. I wasn’t lying to myself about how I felt, but I also wasn’t being pessimistic. I never let myself get down about my running speed, even when it slowed to what might generously be called a shuffle late in the race. Instead, I cheered myself for continuing to move forward and told myself that any forward movement was progress.

I let myself cringe every time one of the hundreds of spectators said, “You’re almost there!” because I was truly, really not almost there. (Note: Please tell your family and friends to stop saying this to runners. It is horrible, even if well intentioned. I digress.) The point is I think it’s ok to acknowledge that not everything is perfect during a race. That doesn’t mean it’s ok to get down on yourself or be negative. But it’s possible to acknowledge reality, keep going, and finish strong.

Maybe that’s just my inner pessimist being optimistic for a change.