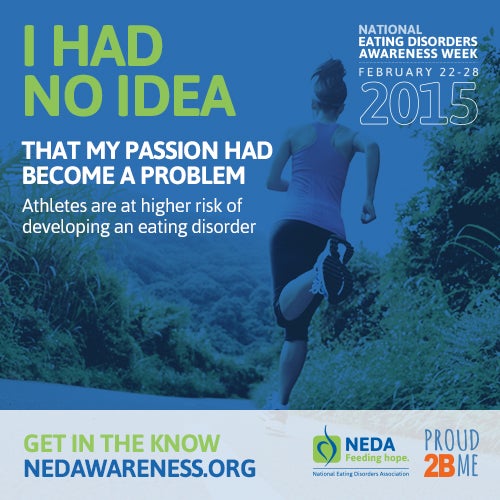 This week is the National Eating Disorder Association’s (NEDA) annual Awareness Week, and the theme is “I had no idea.” As someone who spent 12 years suffering from an eating disorder, I can attest to being in denial about how dangerous my behavior was at first. Athletes are at a higher risk of developing an eating disorder than the general population, particularly when they compete in sports that are focused on aesthetics or weight – and yes, running is one of those sports.

NEDA says:
Body image problems, disordered eating and full-blown eating disorders are common among athletes. Though most athletes with eating disorders are female, male athletes are also at risk – especially those competing in sports such as wrestling, bodybuilding, gymnastics, and running, which tend to place an emphasis on the athlete’s diet, appearance, size, and weight requirements.

Eating disorders often start out innocently enough. You start becoming more invested in a healthy diet and increasing your activity level in a quest to get fit, but these behaviors can quickly be taken too far. It’s a slippery slope. One day, you’re trying to limit yourself to just one brownie after dinner (instead of the usual 3) and before you know it, you won’t eat any sugar at all…or processed foods, or dairy, or gluten, or grains or meat or anything that isn’t green. Did you know that as many as 35% of “normal dieters” will develop disordered eating habits at some point in their lives? When the quest for health becomes all encompassing and the mere thought of eating out at a restaurant or a friend’s house gives you anxiety because the foods might not fit your restrictions, that isn’t healthy or normal. When missing a workout because you’re sick, pregnant, or just completely exhausted gives you palpable anxiety and angst, that isn’t healthy or normal, either.

It’s so easy these days to convince ourselves that obsessive behavior around food and exercise is normal because, let’s face it, almost everyone wants to be healthier! I come across many runners and bloggers who have no idea they have a problem because it is easy to hide under the guise of trying to be “healthy.” As women and as athletes, we are at a particularly high risk of developing eating disorders no matter our age. I’d like to challenge you to think about your own behaviors around food and exercise, and consider how you would view those same behaviors if it was your daughter, sister, or mother that was so invested in them. Often, the best way to learn how to care for ourselves is to think of how we would care for others in the same situation, since we tend to extend others much more compassion than we extend ourselves.

Learn more about eating disorders and how you can help someone who is suffering at nedawareness.org.