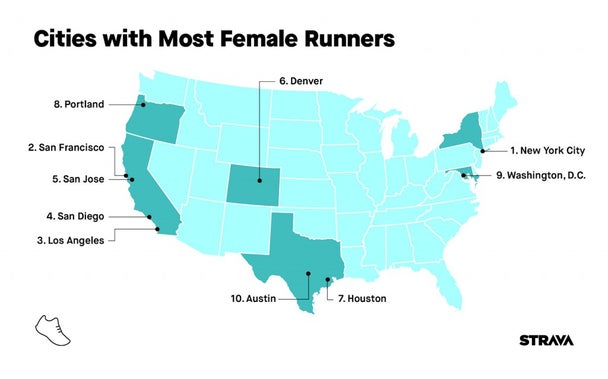 Strava, the social network for athletes, released today its annual report regarding running statistics for 2017, based on data it gathered from millions of Strava users running in 195 countries around the world. Below, we highlight some of the most impressive takeaways from the report.

Women were on fire in 2017! The average female runner ran 4.7 miles per run at a pace of 9:29 minutes per mile and logged a total of 122 miles throughout the year.

That Special Time Of Day

The most popular times of day for exercise differed depending on where runners were located, and whether the workout was a solo or group activity.

The top three most popular fueling foods and beverages mentioned by Strava users were beer, coffee and pizza, with beer coming in as the most popular by far. Strava also recorded a 39.28 percent increase in athletes that tried a Beer Mile this year.

The top three most popular running routes in the U.S. for 2017 were:

Most Active And Fastest States In The U.S.

California, Texas and New York are the most active states in the country, according to Strava user logs. However, the three fastest states were different: the average mile paces in South Dakota, Louisiana and North Carolina are 7:36, 7:42 and 8 minutes per mile, respectively.