A runner’s rut sneaks up behind you, grabs you by the neck and pins you down. It is that force that hits snooze when the alarm sounds. It shackles you to bed in the morning. At the end of your work day as you leave the office it softly croons, “Head straight home. Skip the track.” And you listen. You do not pass Go. You do not collect $200. Runner’s rut—every recreational runner’s nemesis.

For some, runner’s rut may set in after reaching a significant milestone, such as completing that first race or achieving a long-sought time goal. The mental and physical fatigue of training kicks in as the adrenaline of success wanes. For others, the cause might be the mandatory post-injury rest period. That self-diagnosed runner’s knee or plantar fasciitis serves, at first, as a valid reason for time away from running—but later as a lazy excuse for extended rest.

Whatever the excuse, a runner can tap into some trusty techniques to get moving again. Sign up for another race (nothing like a new goal to wake up the running bug), or schedule a run with others (nothing like peer pressure from a running buddy). But what about when you can’t kick the rut? What about when seven consecutive days not running become 14, and 14 days become 40?

A runner pinned down by a ludicrous runner’s rut has but one choice: own that rut and even excel at it. 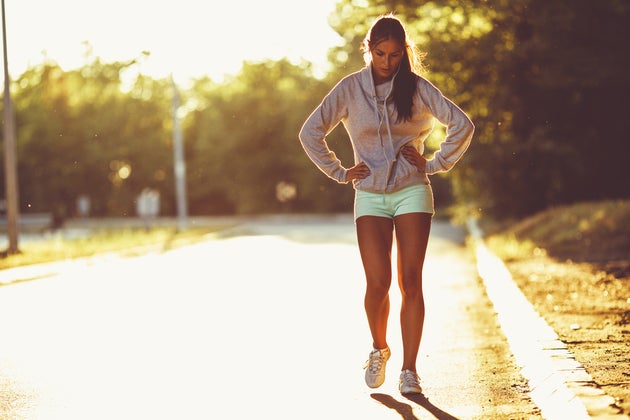 Here’s How To Own Your Runner’s Rut

Forget the 5 a.m. alarms. Deny the rut the opportunity to hit snooze. Sleep in. And when you wake up, ditch the clean eating. A ludicrous level rut must be neutered with indulgent eating at all times. Deep-dish pizza? Yes, please. Acknowledge that thin-crust isn’t the real thing. Before long you will begin to feel sluggish on a daily basis and your clothes might fit differently. This is a normal outcome and should not be resisted.

But really…after a few or many indulgent nights, maybe that runner bug will come poking at you to log a few miles.

As a runner, you’re probably quite used to tracking data on your runs. During a ludicrous level rut, keep track of how long it’s been since your last run. Count the days. Log each rut day manually in your default fitness tracker app. Nike+ and Garmin Connect are particularly flexible. Easiest is to simply add a 1-minute “run” in the app each day of the rut. A more ambitious alternative would be to log a “run” whose duration is equivalent to the number of minutes you spend each day thinking about running without actually getting out there. This is a weekly bonus equivalent to the number of pizzas you might consume on during that week of the rut. With the data at your fingertips, you’ll be empowered more than before to obsess over those missed runs.

But really…maybe a few skipped runs without guilt will inspire you to try a few actual runs without pressuring yourself.

Perhaps the most critical part of owning the rut is making sure everyone in your circle knows it. Share it with co-workers, relatives and the entire church congregation. Tweet it, update your Facebook status, post Snapchats and Instagrams of yourself not running. Use the #runningrut hashtag generously (it’s basically #fromwhereirun but for real runners who truly embrace the rut). Social networking was invented for times like this. Make sure your run squad is in the know, and be certain to share your tracked stats with them in minute detail—it will be appreciated.

But really…shouting out to your social media runner circles could be the kick in the butt you want and need to try to get back out there.

A guilt trip of epic proportions will ensue and your underworked muscles and favorite pair of pants might be responding. If neither is big enough to kick that rut to the curb and get you back to clocking the miles, perhaps a short run will help clear your head? Lace up, and enjoy.