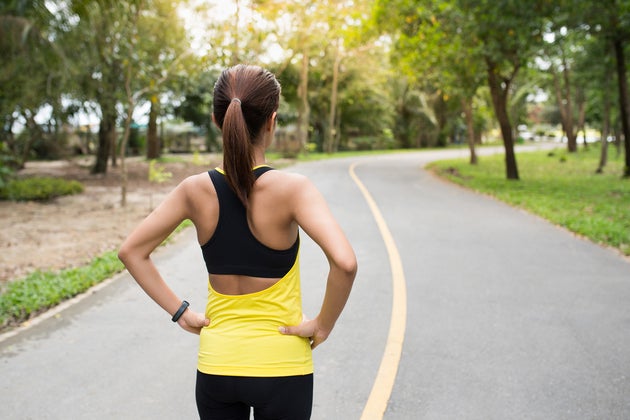 You know it’s springtime when we, the peaceful runner folk, are being terrorized by local geese. They plop down in the middle of our path, hissing angrily when we encroach upon their “sacred space.” This is rough enough for anyone, but particularly if you are terrified of geese. Like I am. Yes, springtime training is particularly interesting for a bird-fearing runner. But it’s also enlightening. As much as I complain about them, I’ve come to realize that those darn geese are an important reminder to me. A reminder to run brave.

As of late, every time I run by a goose, I look it in the eye and say: “I’m not afraid of you!” It sounds silly, but it gives me the extra dose of courage to chill out and keep running. Because, regrettably, I don’t always have a teammate or nearby cyclist to forge the way past the birds. And that got me thinking: How often do I just let myself be afraid of things? How often do I shrink away from a challenge because I’m scared of it or scared of failing? The answer is: Way too much.

And I sense that I’m not alone. While runners are an intrepid breed, we aren’t immune to the pressures of success and failure, and the fear they carry. Unfortunately, it’s very easy to let fear take the reins, once it’s set in. And after a certain amount of time, it becomes hard to even recognize. It’s just a thing. You don’t run “that” race distance or you don’t tell people “that” goal. You just don’t.

So what’s a runner to do? You must first know what your goose is, so to speak. What’s the thing you are shying away from? It could be something big that has sidetracked your running, or something small that only you can recognize. Either way, it’s holding you back. But now that you know what it is, here’s the good news: The worst-case scenario isn’t as bad as a goose attack. You’re smiling because it’s true. Sure, you might fall short of your goal or be embarrassed, but that’s not so bad, now is it? It’s certainly not as bad as letting fear dictate your running career.

Instead, write down the fear or tell a close friend. Look for tangible ways to confront it, ways to use your voice to say: “I’m not afraid of you!” That might mean you train and sign up for that long race. Or maybe you go running with someone you always thought was a little too fast for you. What you decide to do really depends on the fear is. The important thing is that you do it. Because when you step out and confront your fears, you enable other runners to do the same. And suddenly, we aren’t living in a world of timidity and self-consciousness. We’re crushing our personal records and trying new things. We’re growing stronger as individuals and as a community.

I don’t know if there’s something you’re afraid of today. Truthfully, I think all of us have something—if not in running, in life. The key is to root it out and shut it down. Yes, confronting it can be embarrassing or possibly discouraging. But it gives you a step forward. My fear of geese is debatably laughable, I’ll give you that. But the fear I used to have of racing cross country, was not. After a long hiatus, the thought of toeing the line terrified me. So, I signed up for a race over the summer. I didn’t run particularly well, but I did find that I wasn’t scared anymore.

So please don’t ignore your fears as a runner. Confront and work through them. Fight them. Because progress comes on the far side of fear, and you are strong enough to get there.