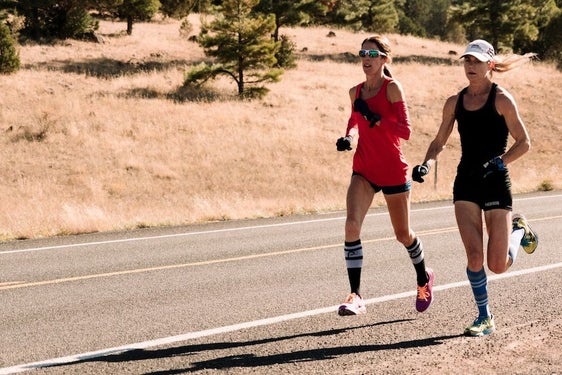 On The Road To NYC

Stephanie Bruce is one of those elite athletes that us everyday runners love learning more about. She’s been an inspiring role model for years, sharing her journey to nailing the Olympic standard with fans on social media and gaining nationwide attention with her honesty about embracing her post-pregnancy body. More recently, Bruce has been busier than ever: she remains involved with Picky Bars as its co-founder, is a professional runner for Oiselle and HokaOneOne and is a full-time mother of two to boot. She also spent the summer and early fall training with Northern Arizona Elite in preparation for what will be her first TCS New York City Marathon. With race day creeping ever closer, we spoke with Bruce about her training tactics, her marathon goals and her determination to put American distance running on the map.

How did this marathon training process go for you?

This has been one of the best buildups of my career. Logistically, it breaks down into 10-mile easy runs in the mornings and 4-mile easy runs in the afternoons–those are our recovery days. On our workout days, we typically have two or three in a week, and those days can be anywhere between 15 to 25-mile days. It adds up pretty quickly. In between, [my husband Ben and I are] fortunate that we have a daycare where the boys go during the week.

This is the first time I’ve been able to train side by side with [fellow Northern Arizona Elite athlete] Kellyn Taylor. We switched off where, when Kellyn had her daughter, I didn’t have children and was able to work out at a higher level. Then it flipped, because I took a break to have children. Over the last two years, I’ve been trying to chase her down. She’s a tough lady and brings her A game every day.

I had two not-so-great workouts, but I haven’t dropped out of any. That’s a good sign that you’re still running within the right effort level.

What goals do you have in mind for the NYC Marathon?

New York is such a tough course to pick a time or a goal because there are so many different factors that can affect how the race plays out. I really just want to have one of the best marathons of my career, to have a strong showing of all the work we’ve been putting in this fall. I hope to be near the front of the race during the later stages. That will probably be determined by how the race goes out. I have an idea of what I’m capable of; how that translates for the course in New York, I’m not sure. But I want to be competitive in the race and be one of the Americans that puts U.S. distance running back in the front of the race.

What are you most excited about for your first time running the NYC Marathon?

I was born in Manhattan, so I have roots in New York. I’ve raced in many New York Road Runner races, like the New York Half Marathon–my PR is actually there. I love racing in New York; I love the energy and the crowds. I’m just trying to prepare for all the areas where people say the crowds are insane. I’m trying to figure out how I’m going to hold that energy in and not let the adrenaline get too pumped up during the race.

How do you plan your racing technique for a race like this, where the professional field consists of Kellyn Taylor and Olympian Shalane Flanagan, among others? Are you more focused on sticking to an individualized plan or responding in real time to moves made by the athletes around you?

It’s a bit of a mix. With Shalane Flanagan participating, it’s great for American distance running. She really hasn’t had a bad marathon. I think that’ll push me, knowing we have an American trying to win the race.

Kellyn and I are very good at running even splits and even efforts. I just have to know the paces we’ve been running [in Arizona] and see how it translates.

How do you get through workouts that are tough physically or mentally?

I have had ups and downs throughout my career and health problems that have led to some poor performances. I try to remember that I’ve done the hard work; despite that, racing should still feel hard. People have the idea that, if you do the hard training, the race should be easy. It’s not like that. I look at the race as the reward for that hard training. I try to be in the moment.

Looking ahead to 2018, what are you most excited about for the year ahead?

We really haven’t thought past New York. This is such a big focus for us this fall. Depending on how I perform in New York, that can determine my 2018 schedule. There are some things I’m fired up about, like running a handful of marathons before the 2020 Olympic Trials.

Check back in with Team WR for updated coverage in the days leading up to the race, and follow us on Twitter @WomensRunning for race day updates. Follow this link for information on how to watch the marathon on Sunday.

How To Watch The 2017 TCS NYC Marathon