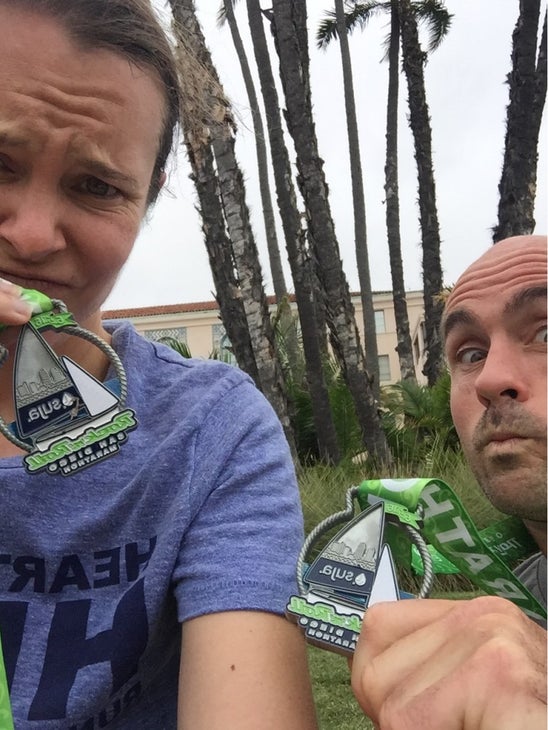 Anyone who knows me knows I’m competitive in everything I do, usually to a fault. When it comes to running, that competitive streak is on major overdrive, and I’ve wasted way too much energy beating myself up over things should be celebrated, not picked apart with my fine-toothed comb of judgment. So naturally, when I finally decided to run my first marathon in January 2015, the one and only goal was simple: to qualify for Boston. I did succeed at my goal, and I completed the Boston Marathon this year. But while I would argue that the Boston experience was unbeatable—those crowds, though—I actually don’t think it was my finest moment covering 26.2 miles. It was definitely the most unforgettable, but not my finest.

The finest moments came around mile 15 of this past weekend’s Suja Rock ‘n’ Roll San Diego event, where I spent a good 15 minutes icing my bum foot at a medical station, trying to calculate the fastest way back to the finish line. But wait, back up—why the heck was I running another marathon barely 7 weeks removed from Boston? Probably because I’m not very smart…but also, probably because I’m competitive. Probably because my wonderful boyfriend had the idea to try and re-qualify at a race near home, since I had missed the BQ mark in Boston itself.

So I quietly kept running after Boston to maintain some form of fitness, ignoring that small foot pain as I did it—but moving past that half-marathon distance proved too much, so I called it quits after feeling really good for the first 14 miles of the race. I called it quits on my goal…but not quite the entire race. As I sat there, feeling embarrassed and defeated and just overall exhausted from six months of hard training, I realized I had a choice: I could duck out completely, bum a ride back to the finish, cry and feel bad for myself for not succeeding, OR I could swallow my pride and muscle through the rest of this race walking (mind you, walking next to thousands of running runners was probably the most difficult thing I’ve ever done in a race) and appreciate the fact that 1 mile ago, my boyfriend, Ryan, ignored his desire to DNF to stay with me after giving him the YOU CAN’T LEAVE ME look. In that moment, I knew one choice would lead to a finer ending, so I made the decision to keep moving, no matter how slow.

So we walked, then we ran a bit, then we walked more and started talking. I had never run a marathon with Ryan before, so this was a brand-new experiment of both strength and weakness for the both of us. We laughed when we realized that we would still break his ridiculous personal best on this course, we snickered at funny spectators and runners wearing weird things, he stopped at every Twizzler station, I walked through every water station, he told me he was so proud of me for knowing when to stop, I told him I was so grateful he was there. In fewer words, I essentially shrugged off something I never through I could shrug off: I was about to walk half of a marathon. I even stopped to high-five a friend handing out beer at mile 20, something I would never, ever, ever do—who stops and chats during a race?! Apparently a lot of people do, I just never took the time to appreciate that part of it.

As we approached the dreadful climb up the freeway that makes parts of the Boston course look like a dream, it sunk in for real that I was literally not even going to break 4 hours at all…my slowest marathon ever (I’ve only completed three, so that statement is super dramatic). I felt so embarrassed, so upset, yet…I felt relieved. I didn’t have to race the clock I’ve been racing my entire life. I didn’t have to be competitive against the guy next to me. I didn’t have to obsess over my watch and try to make up time on the downhill finish. I could just toss the numbers into the air and revel in the fact that we were slowly moving up an entirely closed freeway (zombie apocalypse much?). Ryan started singing ridiculous(ly sweet) songs to me as we made the slow trudge toward the top, and suddenly all I cared about was finishing; I believe this was truly the first real time where that really was all I cared about. I got to share the beautiful deliriums of covering 26.2 with someone who’s seen me through pretty much every other race in the last 3 years, and on that day, that was more than enough to make this marathon the best one yet. There’s something special, as I now know, about sharing a marathon with someone else, someone you thought you’ve seen every side of. But let me tell you, the colors that come out after 26 miles can definitely paint a pretty rainbow.

I won’t repeat the quote of the day, but it was indicative of three things as we powered through the final mile: how hard finishing a marathon really is, how hilarious it is that words flow freely with 10K to go and how proud every single human being should always feel, no matter how they cover 26.2 miles.