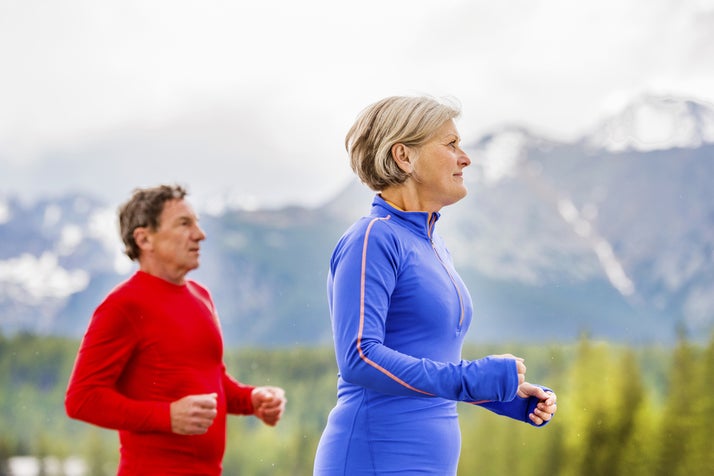 All runners know that eventually, we will run our last PR. It’s a depressing thought, and now as a masters runner, I know I need to train harder just to maintain some of my previous race times from years past. The question is, just how slow will we get with age and can it be predicted or measured somehow?

The answer is yes, thanks to an aging runner, who also happens to be a professor in economics at Yale. Ray Fair developed a table, which, by putting in your best time ever for a race and the age you were when you ran it, will tell you how fast you should be running the distance now and, how much slower you may expect to run it in the future.

Related: Running In Your Fifties

But runners beware! You may not like what you see, and even the creator was unhappy, saying, “I am not on my line. I’m worse than I should be but I’m trying to get back.” To keep himself honest, he has posted his 20K and marathon times adding, “Even though my best time ever was 2:58:45 at age 45, my best age corrected time according to the age factors used on this site was 3:10:00 at age 53. The predicted minimum times above use the 3:10:00 performance at age 53 as the base.” Interesting.

The table is nothing fancy but gives you all the information you need to see your running future. It may even help runners who are slowing down to feel better about their times, as long as they stay “in line” with the age graded predictions.

The site has another interesting feature—the running past, present and future of legend Amby Burfoot, who famously won the Boston Marathon in 1968. That same year, he won a smaller, lesser known 4.748 mile Manchester Road Race, held every Thanksgiving Day in Manchester, CT.

Related: Running In Your Sixties and Beyond

The table shows the 51 times Burfoot has run the Manchester Road Race, (his fastest being 22:32 at age 22) including all predicted and actual paces and, how far he deviates off his “line” or best age corrected time. Remarkably his age 63 time is only two seconds off the line at 30:30.

Burfoot is quoted on the site as saying “Manchester was my first road race, in the fall of my senior year in high school. Four years later, I won it for the first time in the same year as my Boston Marathon victory. Since then I have run Manchester while training 120 miles a week; on an emergency home visit while serving in the Peace Corps in El Salvador; with “walking pneumonia”; with severe achilles tendinitis; while carrying an umbrella to keep the rain off my wife; while focusing for three decades on my professional career at Runner’s World magazine; while getting more serious about training/racing again in my 60s; and after meniscus knee surgery at age 64. I hope to run a few more, some no doubt slower than others. And then much slower. At this point, finish time seems less important than simply keeping the streak alive.”

So, are you brave enough to find out just how slow you will go? Give it a try!

The author’s half marathon PR is 1:28, set at age 39. According to Fair’s table, at age 76 she will be trying mightily to hold onto a sub 2-hour finish. Time flies!