It may sound overly dramatic and just a little self indulgent but I’m serious when I say, the feelings I’ve had the last couple of days are exactly how I felt before B was born. Minus the hand-in-the-vagina bit, even the preparation is the same.

I’ve packed a bag to unpack it and pack it again.

I’ve felt a very real need to cleanse body, soul, home and mind. (You should see how clean my skirting boards are!)

I’m taking body selfies to see just how much my body as changed. 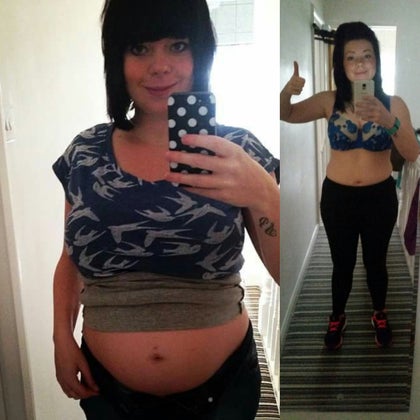 I’ve tried to change my diet, take vitamins (because of the whole eating chalk malarkey) and listen to experts about the do’s and dont’s.

I’ve muttered the words ‘This time next week I’ll…’ three hundred times, much like I did for a whole month before B came along.

I’ve thought I can’t do it.

I’ve thought I’ll be epic at it.

I’ve over-thought it to the point I feel like I know absolutely everything and nothing at all.

I’m excited and frightened and one minute very ready—and the next not at all.

I think about why I’m doing this, what I wanted and want from it, how it will change nothing but everything and then I feel ridiculously proud.

Four years ago there was no B and definitely no run intended (see what I did there?) and now there’s both: a beautiful little girl, a reasonably good book, a run intended and thousands of miles, literally, thousands of miles, behind me, so whatever happens on April 24th 2016, whether I’ll be the same person I was pre marathon, whether I have sex straight away or three months later, whether or not I cleanse myself thoroughly before I get on the Megabus heading to Victoria, I am allowing myself to feel a little bit smug and a little bit relaxed.

Just like I did before I went into labour.

RELATED: What Going To The Gym Looks Like After Having Kids

After all, the hard work has been done, sort of; I’ve grown into a marathon runner, like I grew B.

I know the actual race will be long, tiring, amazing and I’ll be bloody starving after.

I hope I don’t shit myself or hurt myself or fall short at the last hurdle and need pain relief to get over the line but I also can’t wait to show myself, the world, B, just exactly what I’m capable of.

And yes, I will bring that medal home and look after it and treasure it and show it off exactly how I brought B home and treasured her and took her to town so people could muse over her beauty!