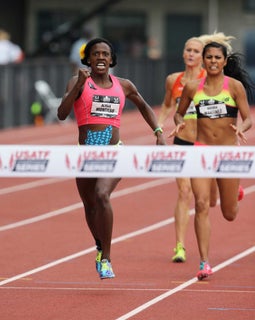 On a hot day in June, Olympian and May 2015 cover runner Alysia Montaño won the national title in the 800 meters at the track and field outdoor championships in Eugene, Ore.—and tied the record of most outdoor wins at that distance.

Following the race, the mother of one posted the above photo to her own Instagram account, saying “This one is for all the mommies, but also for all of the supporters of mommies, for the ones that make up this village.”

Montaño gave birth to her first child, Linnea, less than a year before running herself to an exciting—yet surprising—national win. And exactly one year ago, the world’s jaw dropped when that same mom started that same race and came in dead last—with her 8-months-pregnant belly peeping from underneath her pink singlet at the 2014 outdoor championships. She raced for Linnea then, and she raced for her again this year, greeting her almost-1-year-old and husband with an emotional kiss at the finish line.

Although one reason the victory was unexpected was due to some “ups and downs in training,” the elite runner still managed to capitalize enough on her training to dash away with another national gold. And even still, the runner says the one thing she wants her daughter—the Riley Curry of track and field, as some called her—from her is that doing your best and giving everything your all is way more important than actually winning a championship.

Here are three training takeaways from one of the world’s fastest middle-distance runners: