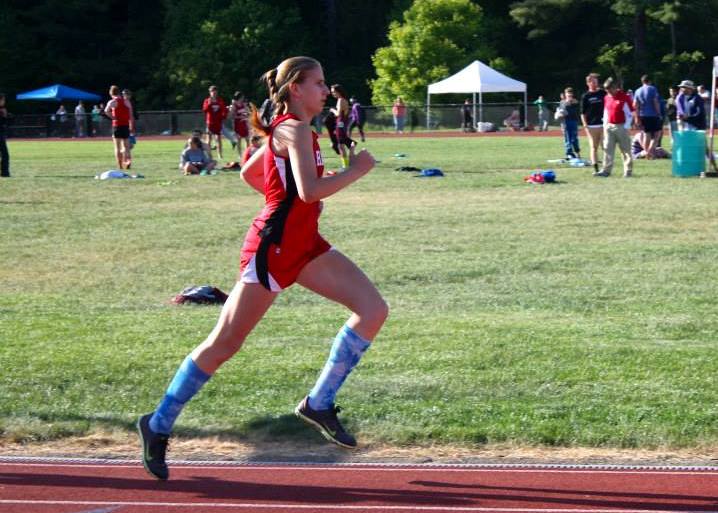 The beginning of my running career started approximately six months after one of the most devastating months of my life. In March of 2012, I was diagnosed with Graves’ Disease, an autoimmune disease that had been breaking down my body for three years. I had become so sick that I struggled to write in school and I had a hard time walking up the stairs. I could barely touch my knees, and my calves would cramp up if I tried to kick my shoes off. It was hard for me to run, not only because my muscles were so weak, but also because they were extremely tight. The people around me labeled my weakness as me choosing to be lazy, even though I was playing soccer year-round and going to three practices a week. During my first season of running, I would come home and cry because I wasn’t the athlete that I felt inside. Ultimately my first year of running was all for me—no glory, no medals, only hard work.

After being diagnosed, I was actually excited because it brought me hope. Then I realized that this was not going to go away like a cut. I had to take medication twice a day for two years and go for constant blood work to regulate my thyroid hormone levels. And with all of this medicinal therapy, my muscles would not rebuild themselves. I needed to start from scratch to rebuild my muscles. I began to tremble in fear of the future–could I still be an athlete?

Related: I Beat Medical Setbacks To Qualify For Boston

In spring 2012, I made the decisions to stop playing soccer and running track in order to recover from the exhaustion I had been facing the last three years. I was so weak that I couldn’t run the length between telephone poles without being out of breath. Before joining the cross country team I ran a flat 5K around the reservoir. I finished it in more than 38 minutes without walking.

In the fall, I entered 9th grade with a 504 plan—which affords people with any type of disability the opportunity to participate in federally funded programs—that would allow me to type my school work so that the teachers could read it. I also joined the cross-country team. For the first half of the season I started every race in dead last, but as the season went on, I passed more and more people because I refused to give up. I was getting stronger every day. Even when I was running so slowly that I was barely faster than someone walking, I kept running. Throughout that season I followed every set of directions exactly, and even when I couldn’t feel my feet or I couldn’t breathe, I kept going. In the back of my mind I told myself how being weak wasn’t me and how I didn’t like running by myself in the back. I told myself that the only way to get better and stop suffering through the pain would be to embrace the pain.

I still remember when the faster runners were training for the championship. I was the only slow runner that showed up to practice. We went on a 3-mile run. By the time I was .75 miles into the run, there was no one in sight and I broke down in tears. I asked myself, “Why do I do this? Why am I so slow? Why can’t I be like everyone else?” Little did I know that about .75 miles from there, some of the intermediate runners that were way ahead of me had decided to walk. When I caught up to them, I kept running. My pace wasn’t much faster than their walk, but I was still running and I was not going to stop until I finished the run. I knew that there was only one way for me to not have more of those sad and lonely days—and it was to keep training hard.

Related: I Beat My Body’s Barriers To The Finish Line

Today I am faster than every one of the runners I passed that day. I have accomplished goals I never dreamed of. I was able to break 20 minutes in a 5K this past cross-country season. On top of that, I have been selected for the league’s all-star team multiple time. I have run in six regional championships in the last three years, and I have helped lead my team to a league championship and qualify for the state championship. Although running began as a way to rebuild muscles, it ultimately recreated my character into the strong person I always hoped to become.