Pam Reed hits the trails in the Teton Range, not far from her home in Jackson, Wyo.

Pam Reed’s running résumé has been known to draw audible gasps. In 2002 and 2003, at the Badwater 135, an ultramarathon through Death Valley, Calif., in mid-July (where temperatures often climb to 120 degrees), Reed not only finished and won the women’s championship— she beat every single man to become the very first person to cross the line. Reed also is the first person to complete a 300-mile run without sleep, holds the American women’s record for a 24-hour track run and has finished more than 100 races of 100 miles or longer. At 55 years old, her boundless energy and grit make her nearly superhuman.

How does she accomplish these unbelievable feats? In practice, Reed says she is not so different from your average runner. “I think about [skipping my workouts] every day,” she says with a laugh. “Especially the pool. Oh, I just hate it! I don’t want to get in there and work hard.” We’ve all been there, haven’t we? That doesn’t mean she actually skips her workouts though. “There’s a point where you’re not motivated, but you go do it anyway,” Reed says. “But I’ve met way too many people who get completely burned out.”

To ward off burnout, Reed doesn’t record paces or keep a training log, and she doesn’t work with a coach. That’s not to say she doesn’t take her training seriously; after all, we’re talking about a woman who wakes up at 3:50 in the morning to get in three to four workouts per day. No doubt, Reed is a competitor, but she’s also a realist when it comes to training, food and life. When asked what people are most shocked to learn about her, she doesn’t hesitate. “My favorite food is cotton candy!” she howls. “I have cotton candy in the transition at Ironman, and they bought me cotton candy after Badwater. People expect ultrarunners to be uber healthy, but I eat everything: candy, soda, steak, beer! I eat steak before every 100-miler—steak, potato and salad.”

Athletic prowess aside, this confession may be shocking indeed to those who know Reed’s history. She battled anorexia for more than 15 years and ultimately ended up hospitalized, fighting for her life. When asked how running has impacted her recovery, Reed admits that’s not always an easy answer. “Running has both helped and hurt my body image,”  she says candidly. Because her races are extremely long, she often loses several pounds during them, and it can be mentally challenging for her to increase her food intake following these events.

Reed still struggles with viewing her body through a positive lens, but notes that the sport of triathlon—particularly the Ironman distance—has been a blessing in disguise. “The cool thing about triathlon now is that female athletes are so strong and buff ,” Reed observes. “There are very few really skinny women out there. I have tried to build muscle to keep up with them so I can compete, so I focus a lot on strength workouts.”

It’s important to Reed to be extremely open and honest about her struggle with anorexia, because so many female (and increasing numbers of male) athletes struggle with disordered eating patterns as well as full-blown eating disorders. While she has maintained a healthy weight for years, she expects that the mental side of her relationship with food will always be a challenge. “I don’t take any of this [recovery] for granted,” she admits.

Thanks to her mental toughness and newly added muscle, Reed is still competitive in every event she enters—at age 55. This year alone, she was the third female at both the Susitna 100-mile snow run and the Monument Valley 50 Mile, fourth at the Zion 100 Mile, second in her age group at Ironman Texas and well…you get the picture.

As a competitor by nature, Reed is always racing to win, but she notes that her focus has changed over the past few years. “I don’t put too much pressure on myself anymore,” she says. “I find myself looking for new challenges, like the snow races.” Yes, you read that correctly. Running through the blistering heat at Badwater isn’t enough for Reed; she recently started doing 100-mile runs in the winter while pulling a sled! If you ask her why she would try such a thing, you get that trademark Pam Reed laugh. “Because I hate the winter and the cold!” she says with giggles. “The competitive element of these races forces me to embrace the cold and snow.”

If it sounds like Reed feels like she has something to prove to others, think again. It’s all about the personal challenge. That’s why you won’t see her at Badwater this year; she’s taking time to focus on triathlon and some of the “harder” (read: more mountainous) 100-milers out there. She explains that motivation has always come from within: “When I ran 300 miles, I did it because I wanted to and I believed I could, not because I needed to prove anything to anyone.” 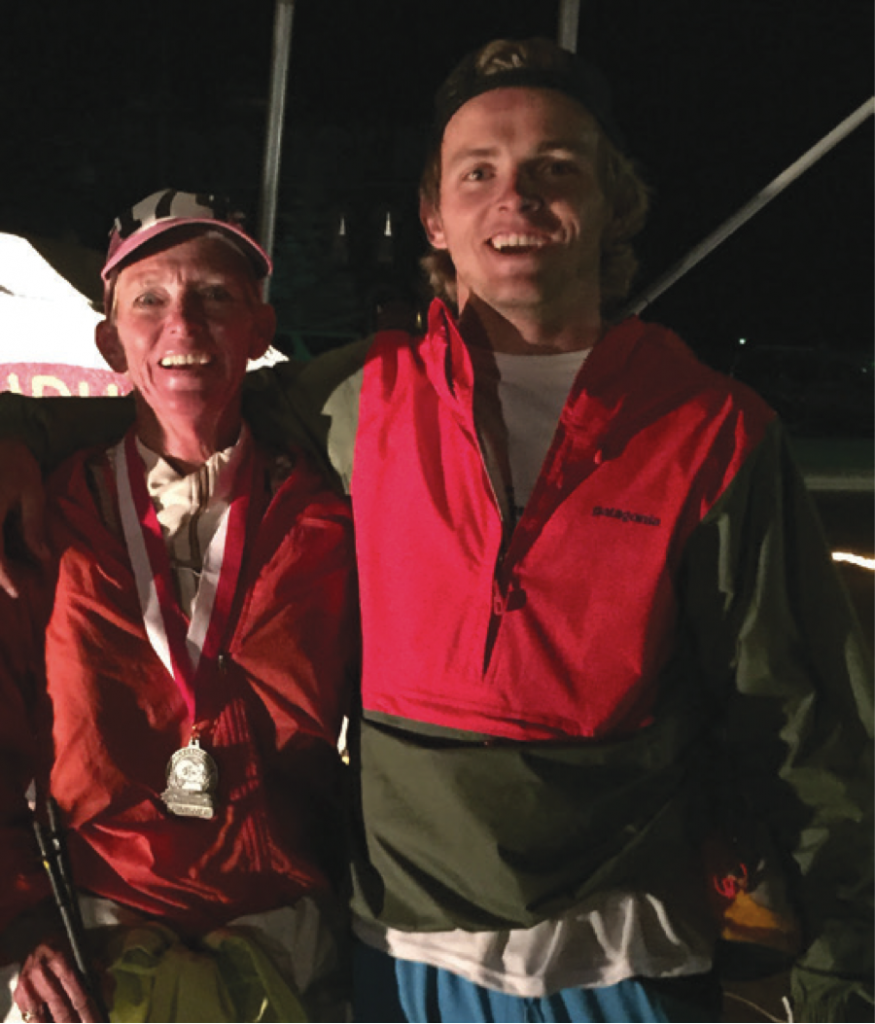 Lest you assume Pam Reed gets in her training thanks to a lack of obligations, hear this…

Reed is mother to five sons. Three of her boys have all run part of a 100-miler with her, and one recently completed a 50K. In fact, one of her all-time favorite running memories is completing the last 11 miles of the 2015 Hardrock 100, one of the nation’s most grueling 100-milers, with her youngest, Jackson (above). “Oh, it was so much fun!” she says. “He gave me energy. I ran those last 11 miles faster than any of the previous 89.” Sounds like those athletic genes run in the family!

Pam Reed loves running in hot weather, and she owes it all to her college physiology professor who said she could acclimatize. “I had just moved from Michigan to Arizona and was really struggling to run in the heat. Just by him saying that it was possible [to acclimate], I started to believe it.” Here are her top tips for running hot.

Break up your runs into short distances throughout the day, so you get used to humidity in the early morning, the midday sun and the hottest part of the day. For example, if you have a 50-minute run on your schedule, go for 20 minutes in the morning, 10 minutes at lunch and 20 minutes in the evening.

Embrace the weather. “Running in the heat is the same thing as running in the cold,” Reed explains. “Accept it for what it is, and don’t dwell on it.”

Freeze a bottle of water and bring it with you. Wrap it in a sock (to absorb the “sweat” from the bottle) and stick it in a fuel belt. It will stay cold for an hour even in blistering temps!

Believe that it is possible for you to become a better hot-weather runner. Hey, it worked for her!