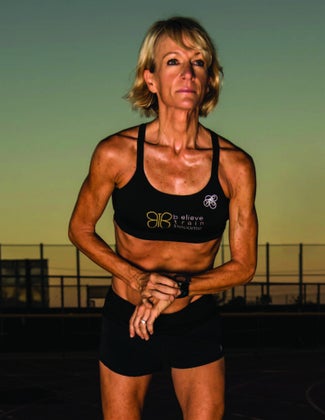 I qualified to run at the Olympic Trials Marathon for the first time at the age of 40!

There I was, standing at the start line of the Indianapolis Monumental Marathon, ready to see how the race would unfold.

While I once hoped this race would be where I qualified to run my fourth Olympic Trials Marathon, I knew that a time of 2:43 was probably just beyond my reach. Having ridden the injury roller coaster over the past several years, I was just happy to be healthy and grateful to be feeling strong again.

I set my sights on running my fastest marathon since entering my 50s. With nearly perfect weather, I soared through the first half of the race in 1:25, feeling confident and happy to have my running legs back.

Related: What The Heck Happened At The Olympic Marathon Trials

I crossed the finish line in 2:53:12, not only winning the masters division, but also setting a new course record for women over 50. With those titles under my belt, I also had the satisfaction of knowing I reached my goal of scoring a new decade PR too.

It would have been easy to get discouraged that the 2016 Olympic Trials would not be in the cards for me unless I raced through another marathon right away to go after that 2:43 time. Instead I chose to focus on the positive. I’d be lying if I said getting to that place mentally didn’t take effort. But after much soul-searching, I decided that I’d rather be running healthy for the rest of my life than be riddled with injuries because I pushed my body too far.

Running is my passion, but my purpose is to inspire others through the journey. Having earned an entry to the Olympic Trials Marathon for the very first time at the age of 40 and then again at 44 and 48, I’m no stranger to shooting for the moon. And I’m living proof that even if you miss, landing among the stars is pretty cool too!