After Injury, Shalane Flanagan Returns To Race The NYC Marathon

The whispers and Instagram posts are true—Shalane Flanagan, who hasn’t raced a marathon since Rio, is running the NYC Marathon this November. That means we can all cheer as she storms through the boroughs, as Meb Keflezighi delivers his swan song and as Tatyana McFadden runs toward a record sixth title in the wheelchair division. Dang!

“…Shalane, meanwhile, who owns the best New York City Marathon finish by an American woman in the last 27 years, returns in search of another podium finish,” said Peter Ciaccia, president of events for New York Road Runners and race director of the TCS New York City Marathon. “This All-Star American lineup for 2017 will certainly raise the level of excitement around this year’s race, further elevating the support of professional distance running in our country and inspiring the millions of people around the world tuning in to watch these great athletes compete.”

Flanagan is the second-fastest U.S. female marathoner of all-time behind Deena Kastor. She’s also a four-time Olympian and was awarded the bronze medal over 10,000 meters at the 2008 Olympics, which was just upgraded to silver. In 2010, she finished as the runner-up at the New York City Marathon, the best finish by an American woman in 27 years. And to warm your hearts even more about her return to 26.2, Flanagan will race this year’s race as an NYRR Team for Kids Ambassador alongside Keflezighi. Just last weekend, she took part the Percy Sutton Harlem 5K as a Race Buddy for NYRR’s Run for the Future program, which empowers young women entering their senior year of high school to learn about running while building self-esteem and confidence, developing leadership skills and training to complete a 5K run. 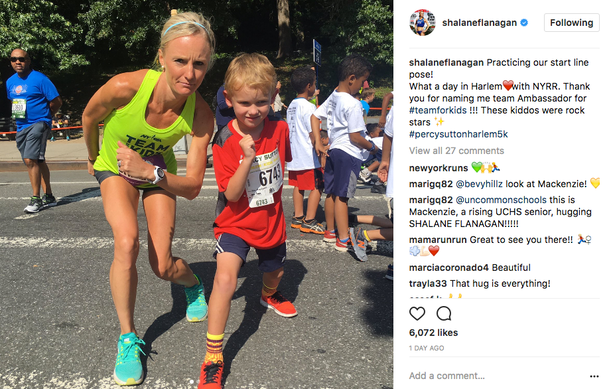 “Seven years ago, I started my marathon career on the streets of New York City,” Flanagan said. “It was one of the most thrilling experiences in my career, so I’m beyond excited to be returning this fall to where it all began. New York has always had an abundance of top competition. and I look forward to testing myself against the best in the world once again.”

Flanagan dropped out of this year’s Boston Marathon due to an injury in her lower back, so we are extra thrilled to watch her line up against fellow American marathoners Neely Spence Gracey, Stephanie Bruce and Kellyn Taylor.