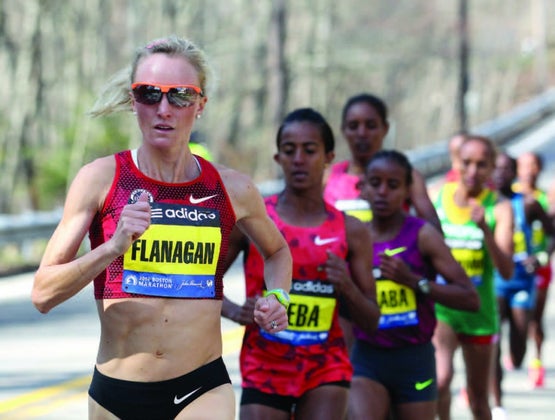 For the second year in a row, Shalane Flanagan, 35, won’t be running the Boston Marathon. In January, a heavy snowstorm at her home in Portland, Ore., meant two weeks of training on snow, ice and a treadmill. She developed what she thought was just a tight, sore back, but in reality, it was a fracture in her hip that left her barely able to walk. We caught up with the second-fastest female American marathoner in history just days before Monday’s race for an update on her recovery and to find out what’s next.

What was the official diagnosis?

An MRI showed a fracture in my iliac crest, which is extremely rare because it’s technically not a weight-bearing bone.

Did you consider racing in Boston anyway?

I could barely walk for two weeks and if I couldn’t walk, I couldn’t take the 120-mile weeks of pounding that I’d normally do to prepare for Boston. I also needed a solid eight weeks—minimum—to prepare. At that point, there were 10 or 11 weeks left and I didn’t know how long it would take to recover. I was told six weeks. It ended up taking about nine.

What did recovery entail?

Two weeks of nothing. Then I slowly integrated swimming, aqua-jogging and cycling. Last week was my first full week of running. Right now, I’m trying to get up to a one-hour run.

How did it feel to withdraw from Boston?

It was an easy decision because I was in so much pain that I couldn’t even fathom running. However, emotionally I had a REALLY hard time with it. Trying to win the Boston Marathon is ‘it’ for me. It’s the most meaningful race in my career. I really want to win it. It’s the reason why I’m still going. So to have passed on it last year—consciously—to do a good job at the Olympics was tough. This year, I was so amped for it, so when we said it’s not going to happen, initially, I was like, “Oh, I’ll spend time with my family, maybe go on vacation.” But honestly, there were a lot of tears shed that first week because I had to mourn the loss of this goal and this dream.

Did you eventually do anything fun?

I did! I’m working on another cookbook so I did a lot of recipe testing with my co-author, Elyse Kopecky, in Bend. And then, I’m a foster parent, and my husband and I hadn’t taken a vacation in seven years so we took the girls to Hawaii and had an incredible time!

Identical twins from Portland. They’re 17, seniors in high school. In fact, they had a high school track meet last night and ran 100, 200 and 400. They moved in with us right before the Olympics this summer but I was training in Park City, Utah, so I didn’t meet them till after I got home from Rio. Their mother and father are both deceased. They have a loving and caring grandmother and two brothers. They just need help taking care of the girls, so they’re with us. They’ll live with us next year, too, when they’re going to community college. Their names are Breauna and Keauna Cobb.

Will your foster daughters come to Boston?

No, they have school and I’ll be working all weekend. I’ll be doing commentary on WBZ on Monday. I’m also a John Hancock elite athlete ambassador. I’ll be doing the expo and a cookbook signing for Run Fast, Eat Slow. My second cookbook doesn’t come out until 2018.

Any idea when your next races will be? Fall marathon? Boston 2018?

I’ll take it week by week until I’m totally healthy, but I’d love to compete in June or July. It just depends on how my body comes around. I’ve committed to running a fall marathon; I just can’t say where yet. And yeah, since I didn’t get a chance to run Boston this year, it’s definitely inspired me to try at least one more time. I can’t imagine not giving it one last effort.