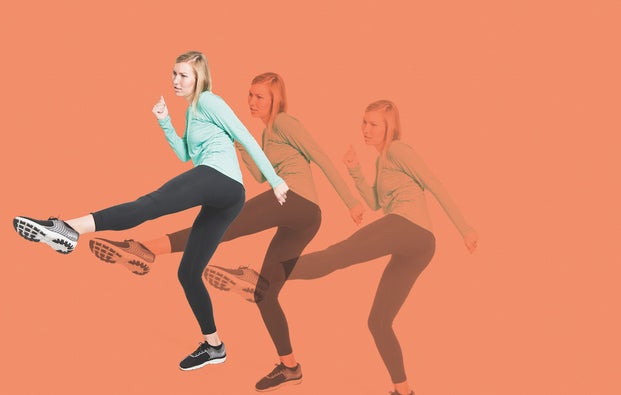 Kelly Herron was four miles into a Sunday afternoon run earlier this year when things took a life-changing turn. Ducking into a restroom in the middle of Seattle’s Golden Gardens Park, Herron was attacked by a man hiding in a stall. She was blindsided and a frightening struggle ensued. After he punched her in the face and knocked the 36-year-old to the ground, she crawled into a stall and he followed. “I remember thinking, This is it. I am going to be raped on this concrete floor with sand in my teeth by this revolting person,” Herron says.

Using self-defense techniques she had learned recently at an office workshop, Herron managed to break free and lock her attacker in the bathroom until police arrived. Today, Herron proudly calls herself a survivor, not a victim, of assault. “Women are BUILT to be strong, to be brave and are capable of more than we can even imagine,” she says.

Unfortunately, Herron’s story isn’t one of a kind. From catcalls to indecent exposure, female runners everywhere have tales of harassment mid-stride. Though the likelihood of an attack is very low, it’s best to have the know-how to defend yourself. As gruesome attacks land in the news, more women are finding value in not only learning self-defense but carrying protective gear, too.

Here, Rubin gives us her eight essential self-defense tactics for female runners. She suggests practicing them whenever you have a spare moment, like while you wait for the subway or for copies at the copy machine. “See how many repetitions you can get in a minute,” she says. 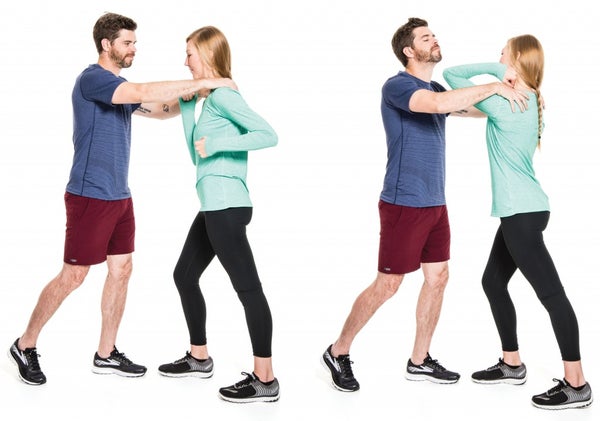 Use when: Attacker places you in chokehold or has hands on both shoulders

Stand with feet in staggered stance, making a fist with your dominant hand. Starting with arm at waist height, thrust elbow forward and up, aiming for attacker’s chin.

Rubin says: “If the guy’s talking shit, it’s going to shut him right up.” 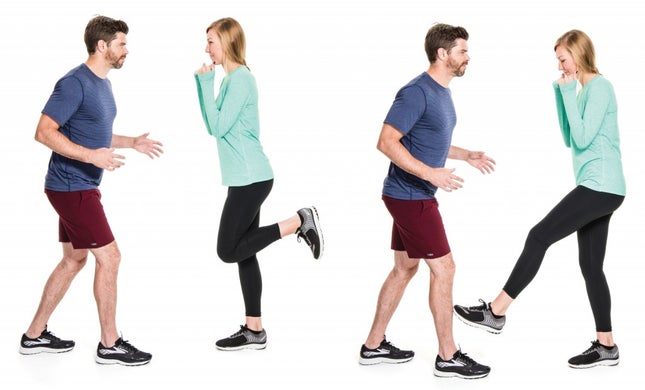 Use when: Attacker comes toward you with hands up

With hands up to protect face, start with dominant foot back like a flamingo. Kick toward attacker’s shin.

Rubin says: “Your legs are longer and stronger than your arms, and this allows you to attack from farther away.”

Use when: Attacker grabs you by the upper arm or sleeve

Stand with feet in staggered stance. Swing arm backward as if you’re swimming, then diagonally across the body like a tennis serve.

Use when: Attacker grabs you by the collar

Stand with feet in staggered stance. Swing dominant arm up toward 12 o’clock and down in front of face. Once attacker’s grip becomes dislodged, pivot and escape.

Use when: Attacker grabs hold of both wrists with arms separated

Stand with feet in staggered stance. Bring hands together, then swing arms up with force. Once attacker’s grip is loosened, pivot and escape.

Strike To The Ear 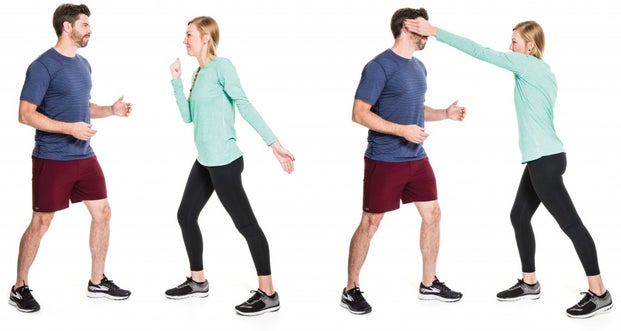 Use when: Whenever it’s available

Stand with feet in staggered stance. With elbow locked out on dominant arm and palm flat, swing arm directly for attacker’s ear.

Rubin says: “Not only are you cupping their ear and hurting the eardrum, but the palm is hitting the temple, which is an equilibrium pressure point. If they don’t see this coming, this is a super-valuable tactic.” 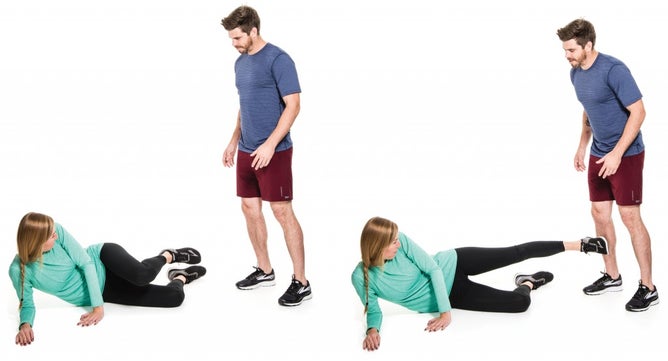 Use when: You’re on the ground and attacker is coming from above

Lie on your side. Support yourself with your elbow, with your forearm and palm down. Use your top leg to kick out toward attacker, aiming for either the thigh or shin. 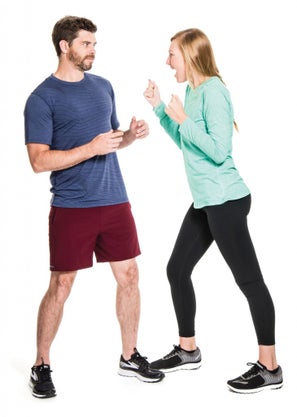 Use when: In any threatening situation

Make it loud and with attitude to be most effective.

You stash your credit card and house keys in your sports bra or tights pocket for your morning jog, but what about other protective gear? Here are Rubin’s three rules for arming yourself on the run:

The Basics of Arm Form for Runners