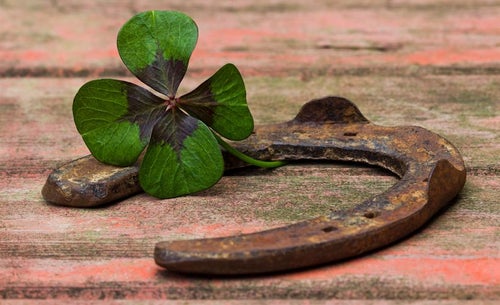 From lucky socks to the number of miles that equal the perfect warm up, let’s talk about runner superstition and the many quirks that go into a perfect race day.

Ryan Hall, once the fastest marathoner in the United States, told Men’s Journal, “I never forget to have extra Band-Aids for my nipples. When I set the American record, it was my nipples that hurt the most. Chaffed nipples can ruin your day.” So true.

Most of us will not be running a 2:04:58 marathon like Hall did in Boston in 2011, but we all have our pre-race rituals–and many of them involve food. Here are some of my favorites, gathered from our friends on Facebook:

If you’re nodding your head in agreement to any of these and can relate with rituals of your own, there is good reason.

Dr. Jeffrey Brown, lead psychologist for the Boston Marathon medical team and assistant clinical professor in the department of psychiatry at Harvard Medical School and McLean Hospital, calls this “magical thinking” in his book The Runner’s Brain and dedicated an entire chapter to his findings about runner superstitions. Dr. Brown explains that these rituals are a way of calming our anxieties and notes they exist in the animal world, too: “Regardless of species, it seems superstitions become behaviors when the brain repeats whatever actions preceded past successes.” This rings true for any runner who eats the exact same pre-race meal, with no exceptions.

Behavior analysis in psychology shows us why this actually works (citing our reticular activating system, or RAS). It’s not specific to runners; in fact, it occurs at the highest level of almost every sport.

“Tiger Woods only wears red shirts during final rounds,” Brown writes in The Runner’s Brain. “Serena Williams always bounces the ball five times before the first serve and twice before the second. Hall of Fame baseball player Wade Boggs is really superstitious–he had to eat chicken before every game, took precisely 150 hits before each game, and always wrote ‘chai,’ the Hebrew word for life in the dirt before each at bat.”

The next time you’re feeling silly about searching for your lucky hat or needing a specific piece of jewelry before you feel prepared to line up at the start, know that there is a reason for your behavior and that you’re in very good company.

What Olympian Shalane Flanagan Does Before Every Race