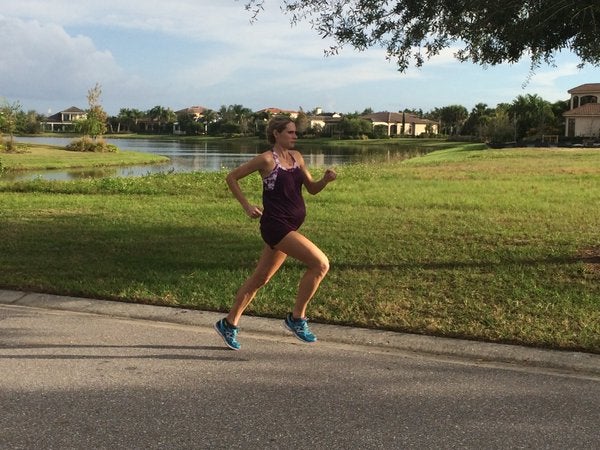 With the start of the U.S. Olympic track and field trial on the horizon this July, Sarah Brown knows it’s crunch time. The top American 1,500-meter runner and her coach, husband Darren Brown, are on what they call the “smart-but-aggressive approach.” After all, Brown gave birth to her first child one month ago.

While Brown maintained a high level of training throughout her pregnancy, she still has some ground to make up. But if she can be part of the crazy odds of becoming pregnant while on an intra-uterine device (she’s one of the less than one percent of women who become pregnant on a IUD) and give birth to a healthy baby girl, who’s to say she won’t make the Olympic team?

The Road to Trio

When she found out she was pregnant, Brown—who already had the Olympic standard and qualified for the 2016 trials—was in a base-building period. Once she received her doctor’s okay, she started training again with some modifications. That included more cross-training like swimming and the ElliptiGO (indoors on a trainer)—activities Brown would be able to continue doing late into her pregnancy—and closely monitoring her core temperature during workouts.

“And fans. All the fans. If I was running on a treadmill at the gym, I’d be the fan hog,” says Brown.

A key part of her prenatal routine? Pelvic floor exercises. Knowing that this would be an important factor in her comeback, Brown consulted with a pelvic floor specialist who gave her a series of exercises to perform. The specialist also recommended that Brown wear a SI belt while running to help stabilize her hips and sacroiliac joint, which can often feel “loose” thanks to the hormones preparing the body for labor and delivery.

Related: The Reality Of Pregnancy, Labor, Birth And Training Again

At the 20-week mark, muscle spasms forced Brown to stop running completely and rely on cross-training. “When you’re pregnant, I’ve learned that things can change really quickly. What you can do one day you might not be able to do the next day. You have to be really prepared to adapt,” she says. “The biggest thing I learned was not letting myself get frustrated that I did have to change something.”

On Christmas day (27 weeks), Brown and her husband headed to the track to test things out. But she felt so good that they turned it into a full workout: 3 x 1-mile repeats. From that point on, Brown continued running four days a week—two workouts, a medium-long run (10 miles) and a long run (12 miles). The other days were dedicated to cross-training. “We really tried to make the running days count because it is a lot of load on your body,” she says. “Our goal was to run pretty much every other day and get the quality we could out of those runs.”

Related: The Do’s And Don’ts Of Running Through Pregnancy

While she definitely was ready to starting running without a baby on board, Brown actually started getting faster late in her pregnancy. “I was getting bigger, but I was getting faster,” she says. “It could have been that I had to take that four week hiatus from running so I was just getting stronger. But I think my body was just starting to adapt to the weight I was gaining.”

But faster didn’t necessarily mean it was comfortable. The most frustrating part of running while pregnant for Brown? The constant need to pee. “You know it’s a big deal when you’re out for a run and you’re thinking about where the next bathroom might be,” she says. “It became the sole focus of some of my efforts.”

The Road to Rio

While the early arrival of her daughter gave the 9-time All-American an extra two-plus weeks before the trials, she’s still attempting one of the fastest returns to elite form in professional running (all with the her doctor’s go-ahead of course).

Brown and her husband were cautious in the first days. “We had great weather the week I got out of the hospital so I was able to take Abigail out in her Bugaboo stroller. As a new mom, it was really exciting—just to be able to go out, take a few notches down on your workout, enjoy the weather and enjoy spending time with her.”

One week postpartum, Brown began nonimpact training with the ElliptiGO. At two weeks, she headed to the track for her first run. Being a first-time mom, she wasn’t sure how things would go, but she’s felt surprisingly good. Now, Brown is aiming for three workouts per week until the trials, one more than her typical training schedule, with the extra workout incorporated into her mid-week long run.

She’s focused on strengthening her pelvic floor too, reintroducing her exercises one week postpartum. She uses kinesiology tape on her abdominals and wears a Mom Bod FITSplint during her runs to help support her core.

“It’s so tough because you have an idea of where you want to be in your head and you’re not there yet,” she says. But after a set of post-run strides the other day, she got a glimpse of her old self. “I told my husband that was the first time I felt like Sarah running in nine months, that I felt that smooth glide,” she says. “It’s only been a week and a half that I’ve been running and I’ve already noticed some pretty big changes. That just motivates you and helps you remember what your task is, what the end goal is.”