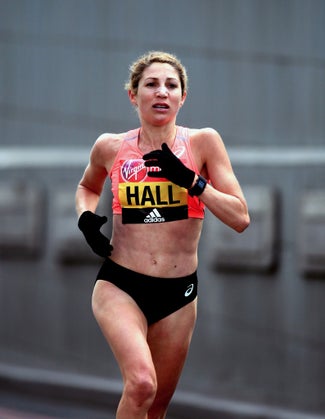 In October 2017, I had the exciting opportunity to attend the Runner’s World Half Marathon and Festival Q&A in Bethlehem, Penn. with Ryan and Sara Hall.

My husband and I were so thrilled about the event that we arrived 10 minutes early (which is a BIG deal for us), and we sat in the very front row. We were eager to hear training tips and racing advice from two of our most-admired elite athletes. As anticipated, we left the 60-minute session with plenty of helpful information, but we also left with something unexpected. We walked out of the packed auditorium with a genuine respect and admiration for the Halls–not only as runners, but as a couple and as parents.

A little more than two years ago, Ryan and Sara adopted four sisters from Ethiopia. Overnight, their family grew from two to six. While this has obviously been a huge adjustment for them, the entire family is excelling. Luckily, they’ve been able to rely on their strong Christian faith and admiration for running, both of which are fundamental components of Ethiopian culture. Their oldest daughter, Hana (now 17), is following in her parents’ footsteps, quite literally. When first adopted, Hana was intrigued by running, but had yet to run a lap in her life. The Halls have helped tap into her unknown potential, enabling her to most recently place 10th in the California State Cross Country Championships. Hana also placed 1st in the Runner’s World 5K, which took place the morning of the Q&A that Matt and I attended.

The day after the Q&A, still energized by our brief interaction with Ryan and Sara, I toed the line for the half marathon. A few miles into the race, I recognized two of the Hall sisters running near my friend and myself. Not only were they crushing the race–these thoughtful teenagers also offered words of encouragement and support to us.

After these interactions, I was inspired to reach out to Sara. I wanted to learn more about her performance in the Frankfurt Marathon on October 29, where she set a personal best of 2:27:21 and finished fifth overall. I was curious to learn how she juggles being a mom, an elite runner and co-heading the Hall Steps Foundation with her husband. Here’s what she had to say:

What was the key to your personal best in the Frankfurt Marathon and what made that race so much fun?

I did have so much fun in Frankfurt! It was definitely the most relaxed I’ve been going into a marathon. Now having run a few, I am feeling a bit more confident. I still respect the distance, but I feel more able to just be in the moment and run more aggressively.

What is the best and most challenging part of having your husband Ryan as your coach?

There so far haven’t been too many hard moments in having Ryan coach me. It’s felt like a natural transition, as he has always been very involved in my running and helped me process through my training and racing. It’s great having him out there with me on the bike to actually see my long, hard efforts, and he knows the marathon better than anyone, so I trust his input. I’d say the most challenging part is, the occasional times we are having a conflict and maybe aren’t talking much, I’m like, “I still need training!”

How do you balance training, traveling and being a mom? Are there any things that you’ve learned from being a mom that have helped you improve as a runner?

Yeah, it’s hard because I don’t really like the word “balance.” I don’t want to do a lot of things in a mediocre way. I feel like to be really excellent you have to be really focused, so it can be difficult. I feel that tension at times when I want to give more to my sport or I don’t want to miss out on something with the girls. But I think we are finding a good rhythm, and I check in with my kids constantly to make sure they are 100 percent behind me. They always encourage me to keep running, so I feel peace about it! There are occasional weekends away, but other than that, Ryan and I are essentially always home when they are home from school. They also get the benefit of getting to travel with us and see the world, so I think it more than makes up for those away times.

How do you continue to develop your daughters’ running interests and how do you use running as a way to teach them about life?

Ryan and I were both very internally motivated, so we have always wanted the initiative to come from our kids. But when we see there is desire there, we definitely want to lean in and support them! Hana has shown the most excitement about running; she genuinely loves it and is super fiery and driven, which is fun for us. We teach her things we wish we knew at her age, and we obviously make sure she’s doing the right training and using the right shoes, etcetera. But we also want to make sure she’s always having fun and enjoying the process. Our 13-year-old, Mia, is also excelling in middle school, and we have let her do as much or as little as she wants as she explores different sports. Our youngest like to hop into races (5K and under) whenever they are available, but we don’t really want them training too much at this point. We’d rather them do lateral movement sports like soccer to work on their speed and prevent future injuries.

What are some of your goals for the Hall Steps Foundation?

Since we have spent a great deal of time in Ethiopia the last few years, we have focused our efforts there to take our “step” in alleviating the extreme poverty and suffering we see on a daily basis as we drive through the city or run through the neighboring villages. There are 60,000 children living on the streets in the capital city alone and 4 to 5 million orphans in the country–problems that aren’t going to be changed overnight, but ones that we feel we are morally obligated to do as much as we can to bring redemption and restoration. We are encouraged by some of the stories we hear back of kids’ lives that are changed in the process, and we are thankful for the runners that choose to partner with us to help those in desperate need through donations or fundraising through their races.

An Intimate Glimpse Of Sara Hall’s Adoption Of Four Sisters

Sara Hall Shares 7 Keys to Her Longevity of Excellence