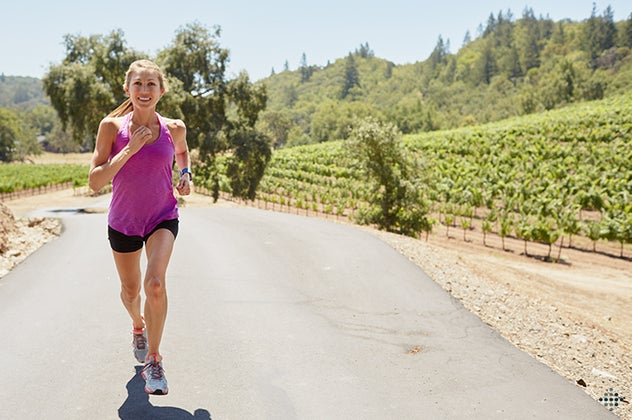 Sara Hall has a full plate. After a hugely successful career as a top distance runner and fresh from setting a PR at the London Marathon, Hall has set her sights on the Olympic Trials next month with the hopes of joining the U.S. Olympic Track and Field team. On top of that, she’s married to recently retired marathoner Ryan Hall; together they are parents to four sisters from Ethiopia, and they are the co-founders of The Hall Steps Foundation, which strives to improve health conditions in poverty-stricken communities. In the midst of all that, Hall found the time to answer a few questions about her training, family and the lessons she’s learned from having it all.

Women’s Running: You’re training for the Olympic Trials—a huge time commitment in itself—but you’re also a wife, a mother of four, and part of the driving force behind The Hall Steps Foundation. How have you learned to balance your career, relationships and your philanthropic passions?

Sara Hall: It is a bit of a balancing act. I feel like I always had to work on time management as a student athlete, and I’ve always liked to be busy so I think I handle it pretty well. I definitely have to have realistic expectations and be really present with whatever I’m doing; when my kids are in school I’m very present with my training so that when they’re home I can be really present with them, and the foundation work I fit in when I can. My kids have kind of known this was a part of my life from the beginning, and I’m able to be here more than if I was working 9-5 so I think they have benefited from getting a lot of time from both Ryan and me. Occasionally we travel on weekends but I’ve started bringing my daughters with me to every race I can, and any race we can drive to we all go together so they get to see new places, which they love.

WR: How do you deal when things don’t go as planned during a race or a workout?

SH: I think I just try to keep perspective on what I’m investing in in the long term and try to not get caught up in just one instance of one workout going badly. I try to see it in the context of an opportunity to teach my kids about dealing with frustration. I ran a race in December in Sacramento—I had the kids myself that weekend actually—and I didn’t run as well in the race as I had hoped, I thought I was maybe capable of a little better, but I tried to use it as an opportunity to teach them.

WR: As you head to the trials next month, what do your final days of training look like, both physically and mentally?

SH: I’m going to run the 5K at the Trials and the first round is on July 7. My year was really focused on the marathon, I ran the marathon trials and the London Marathon, so right now I have a really short window of time to really get my body used to that intense track work and that’s what I’ve been focusing on, getting that lactic acid burn again. I’ve kind of taken a step back from doing all the long runs and tempos because I have so much of that base already. I’m really hitting the track pretty hard which is actually really fun, it’s a nice change of pace to be doing that after doing the Chicago Marathon, the trials, and the London Marathon all in a row. I’ve always really liked fast work, I’m kind of a sprinter at heart. I’m making sure to really get good rest and not get sick which can be really hard when you have kids and they’re always bringing stuff home! One way I make sure I get my rest is to track it with my Fitbit Surge; it tracks how long I was asleep and when I woke up. The first thing I do when I wake up is refresh my app to see how much I slept and see if I need to go back to sleep; I try to get nine hours a night. I can also see my resting heart rate first thing in the morning and see if I need an easy day or can go hard, so having that kind of data is so helpful.

WR: Speaking of Fitbit, you’re an ambassador for the brand. What led you to partner with them, and what role does Fitbit play in your training?

SH: I was familiar with them as a brand but hadn’t really used them until they came out with Surge, which is more for running with the GPS feature. I tried it out to make sure I liked it because I want to make sure I endorse things I really love, and I also love the way it looks, which matters since I never take my watch off, even when I’m all dressed up! I also love that it delivers calls and text messages to me when I’m on a run, because as a mom I feel like I can stay on the grid a little more. When I’m on the track I use the lap run function because it’s a nice way to have that split time on the front of the watch.

WR: Last year your family grew in a big way when you adopted four children from Ethiopia. How has your new role as a mom shaped your career as a professional runner, and vice versa?

SH: I wasn’t sure if I was going to be able to keep running, because I talked a lot with people that adopted older kids from traumatic backgrounds, and that adjustment took everything the family had. So I kind of went into it thinking I may have to stop running or put it on hold, but it really hasn’t been the case for our family. Soon after they were home, I set a PR in a marathon, and then again in London, and in a half marathon; I’ve run the best and trained the best I have since they’ve been home. I think it shows that there’s something to be said about a balanced life. As far as how running affected how I parent, I think it’s just given me a high value for perseverance and hard work, and not being afraid of challenges or failures. I think that’s something I’ve really tried to instill in my kids. Daily, they’re facing a lot of challenges, like they’re still learning the language here, and none of them went to school. So all of those things, I try to draw parallels when they see me running. I try to show them that it’s ok to fail and the important thing is to keep trying and not be afraid of challenges. Alongside that, actually having them run- we never wanted to push that on them but they love it and I think it’s natural to want to do what your parents do- I think through running themselves they started to learn those things I was trying to teach them. Running is an incredible teacher and I’m really thankful that they enjoy it and hope it’ll instill those same things in them.