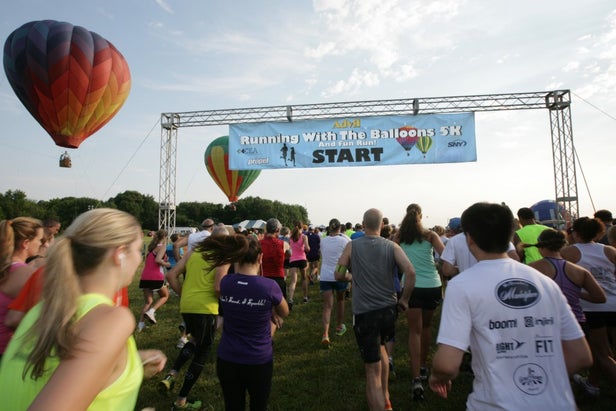 The Running with the Balloons 5K runs through the largest summertime hot air balloon and music festival in North America—aka, if you run the 3.1-mile event, you’re going to look up to see a sky of 100 hot-air balloons flying overhead. Some are as tall as 11 story buildings and shaped like bumblebees, a lion, a panda bear, a barn, an anniversary cake and the American Flag.

Related: 5 Reasons To Add A 5K To Your Bucket List

The July 30 race combines the elements of cross-country with a traditional road race, and, fun fact, the USA Today named it one of the 10 great 5K runs to build a vacation around for its spectacular scenery. And for those competitive speedsters out there, it’s also rated as one of the top 5K races in the country due to its fast course and field of runners.

“We’ve done a great deal of research and as far as we know no one’s ever been gored by a hot air balloon,” said Festival Executive Producer Howard Freeman, referencing the famous running with the bulls that takes place three weeks earlier in Pamplona, Spain.

This race is incredible, running past the balloon launch field while Sunday morning’s mass hot air balloon ascension takes place. It finishes right in the heart of New Jersey’s Festival of Ballooning. The best part possible—the top male and female winners each receive a free ride in a balloon.

“We strive to make our festival experience a memorable one and this includes our 5K,” said Freeman. “The layout of the course is unique, you’re running on multiple surfaces around and through the Festival while 100 balloons are in the sky above you. This is a race unlike any other.”

Even more insane is the cannonball start. In the past the Festival has shot a female human cannonball out of a 27-foot-long cannon and started the race when runners heard the splash from an 80-foot high dive. This year aerialist Alexandra Nock will float over the starting line from underneath a giant helium balloon and unfurl a banner. What!

In keeping with the Festival’s belief in “doing well by doing good,” a portion of the proceeds benefit the Center for Educational Advancement (CEA) for people with special needs in Flemington and the Children’s Miracle Network.

The 35th event, from July 28-29-30, features twice-a-day mass ascensions of more than 100 sport and special shaped hot air balloons from around the world, live concerts, and 39 hours of family entertainment and attractions. Upwards of 165,000 people are expected.