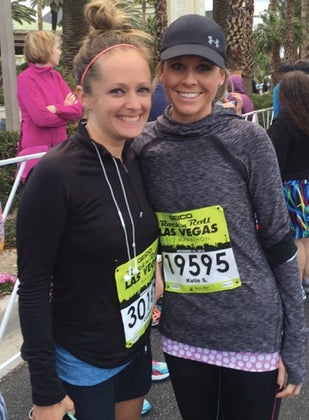 It only took one half marathon to transform Colleen Werkley and Katie Sims from casual acquaintances to running partners with matching tattoos.

Werkley, 35, and Sims, 29, met each other in 2011 through their husbands. The two women saw one another a few times a year and were friendly at social functions, but never close. That was until Sims ran her first half marathon (the 500 Festival Mini Marathon in Indianapolis) in May of 2015. She loved the experience and decided to reach out to Werkley to see if she’d be interested in training together for another half.

Werkley says that the idea of running a 13.1-mile race didn’t sound like fun at first. “I jokingly told her I’d do one if she could find a way to make it into a bucket-list girls’ trip,” says the mother of three and master’s student.

Sims was persuasive and the two women from Indiana started training for the 2015 Rock ‘n’ Roll Las Vegas Half Marathon. They ran together as often as possible and raced six different 5Ks and 10Ks before the big event. During every race, they crossed the finish line side-by-side.

“As I passed the double-digit-mile runs, I thought to myself that there was no way I could have done it without Katie,” says Werkley. “Being accountable to show up for the runs and knowing you don’t want to let the other person down is extremely motivating.”

Although they did not finish the race together in Las Vegas, Werkley, whose asthma kicked up at mile 9, demonstrated an even greater gesture of teamwork by letting Sims go ahead and break their sub-2:10 time goal. She finished in 2:07 with Werkley close behind at 2:19. “It was the first time and will likely be the last time we have ever finished a race separately.”

They’ve even cemented their love for running in tandem ink. Werkley says, “[Our] tattoo is an arrow…an arrow can only be shot forward by pulling backward first. The meaning as it relates to running is that although we may have a bad run or injury, we need to continue to move forward toward our ultimate running goals.”

Related:
The Differences Between Running Buddies And Other Friends
The Secret To Choosing The Right Running Partner