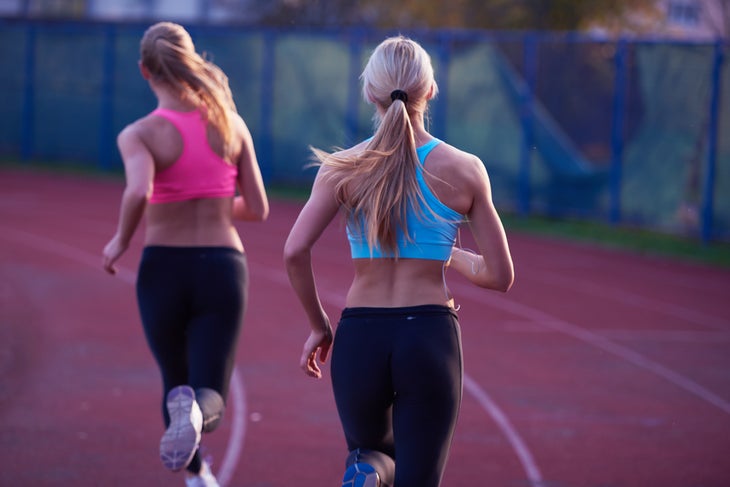 In terms of distance running, the marathon ranks high on the list of difficulty. It requires serious stamina, determination and a dedicated training plan to cross that finish line. Next to, say, the lowly one-miler, the marathon is a true challenge. But there are certain times in a runner’s life when a single mile will feel harder than the hilliest, windiest, coldest marathon ever. Here are five of those moments—watch out, you might get winded just reading about them:

The middle school mile-run test
As if junior high isn’t horrendous enough, many schools implement the mile-run test as part of the gym class curriculum. All the bike riding or backyard soccer in the world isn’t enough to prepare you for what is, for many kids, their first taste of straight-up running. There’s a lot of whining, complaining, shin splints and cries of, “Ohmygod I’ve been running forevvverrr can I stop yetttt?”, but some kids get bit by the running bug and it’s the start of a long and (mostly) shin splint-free running career. A few might even go on to run marathons and discover what it’s actually like to feel like you’ve been running forevvverrr.

Related: Why Running A 1-Mile Race Should Be On Your Bucket List

The first non-treadmill mile
Many newbies ease into running by starting out on the treadmill. Ain’t no shame in that—it’s climate controlled, lets you avoid any incline if you’re not feeling it, and the only marathons you have to worry are back-to-back episodes of Real Housewives on the gym TV. But eventually you decide it’s time for more and venture outside. Even if you’ve been consistently running a few miles during each treadmill workout, once you hit the streets you quickly realize you’re starting over at square one. Hills? Uneven terrain? What fresh hell is this? You struggle through a mile, feel sore for days afterwards and consider returning to the treadmill, but eventually you get past that first mile and don’t miss the treadmill at all (the TV on the other hand…).

The post-baby mile
They say motherhood is a marathon, but so is that first mile after having a child. Babies—they slow you down while you’re pregnant, make you wait to run at least six weeks after they’re born, and after that? Between the insane sleep deprivation and grueling round-the-clock neediness, it’s next to impossible to find the time or energy to go for a run. And even if the stars align and you’re able to get out the door, discomfort and a decreased fitness level can make jogging farther than around the block make you want to cry like a baby yourself. Eventually, several jogs and a few hormonal tears later you’ll find your stride again, run a full mile and feel reborn.

The first non-stop mile
When you decide to take the plunge and become a full-fledged runner, it can feel like your enthusiasm and excitement could carry you ten miles…until you try to run that first one and have to stop a tenth of the way into it. It doesn’t take long to realize you have to work your way up the mileage ladder, not to mention discover how pathetic your lung capacity is and just how badly your legs are capable of hurting, but when you finally complete that first mile without stopping you feel so incredible you could sign up for a marathon…but you probably won’t (yet).

The post-injury mile
Getting injured is the worse. Actually no, coming back from an injury is the worst. You feel like you’re walking on eggshells and are nervous to do more than, well, walk. Will it hurt? Are you truly healed? Do you even remember how to run? That first mile back can be more emotionally taxing and physically tenuous than a full marathon but once you make it through, the only thing reminding you of your injury is the extra-strength knee brace you wore just to be safe.