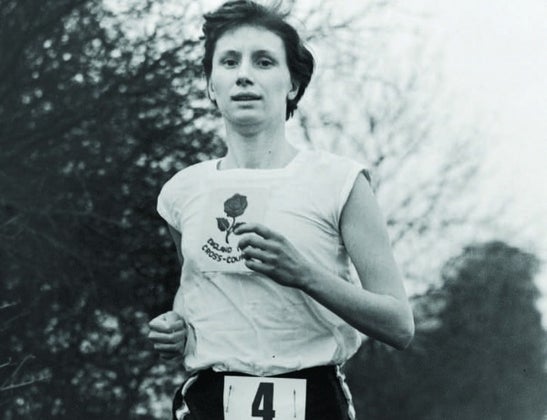 Sixty years ago, on a humble track in England, hundreds of spectators watched as a runner blazed through a 1-mile race. Powered by talent, training and a courageous heart, the athlete shattered a time barrier previously thought to be impossible.

Fans of track and field know this to describe the feat of Roger Bannister, a British medical student who was the first man to run a mile in under 4 minutes on May 6, 1954. However, another runner shares an almost identical story: On May 29 of that same year, Diane Leather, a 21-year-old chemist at the University of Birmingham, became the first woman in the history of the sport to break 5 minutes.

Diane Leather was born on January 7, 1933, in Streetly, Staffordshire, England. The daughter of a distinguished orthopedic surgeon, Leather grew up in an academic household. At the time, it was common for girls to go through primary education, leave school at 15 and work in low-level jobs until they married.

Leather, however, studied to be a chemist, securing a job as a micro-analyst after graduation. She bucked convention in her personal pursuits as well. In lieu of traditionally feminine pastimes, she became a field hockey player—and to get in shape for games, Leather started running.

While watching the 1952 Olympics in Helsinki, Leather was inspired by the female runners she saw on TV. She decided to join a local running club, the Birchfield Harriers, and began to compete in local races. Her natural talent for the sport quickly shone through, and less than a year later, she was one of the best runners in the country.

At the English Cross Country Association’s national championship in 1953, Leather took home first place. That summer, she anchored a 3 x 880 yard relay and ran her team to an official world record of 6:49.

Leather’s commitment to racing fast and training hard would be impressive today, but in the context of the 1950s, it is nearly impossible to fathom. At that time, the International Association of Athletics Federation (IAAF) only allowed women to officially race distances shorter than 800 meters, while the Olympic committee didn’t even allow that.

In 1928, the Olympics had offered the women’s 800 meters, but after reports of runners collapsing  at the finish surfaced (which were later debunked), the organization pulled this distance from the program, deeming it unsafe for female competitors. The distance would not be reinstated until 1960.

Therefore, the inspiration Leather gained from the Helsinki Games had been only from four track events: the 100 and 200 meters, 80-meter hurdles and 4 x 100 meter relay.

Public opinion of women’s athletics was often unsavory as well. In 1938, American sports journalist Paul Gallico wrote in World Sports, “It is a lady’s business to look beautiful, and there are hardly any sports in which she seems able to do it.” In her memoir Marathon Woman, Kathrine Switzer, the first woman to run the Boston Marathon in 1967, remembers being warned that running would turn her into a lesbian and cause her uterus to fall out.

Still, just as Bannister was attempting to push through a boundary many thought beyond the realm of human achievement—Leather was doing the same. With no precedent for her achievements, no road map for her training and no role models to look up to, in 1953, Leather was poised to race into uncharted territory.

On May 26, Leather was ready to make history at Midland Championships at Birmingham, just 70 miles from where Bannister had made history a few weeks be-fore. At the semi-finals of the women’s mile, a crowd with press cameras gathered to witness Leather’s attempt. The young scientist won the heat, but missed the mark by mere tenths of a second, crossing the line in 5:00.2.

Undeterred, she set her sights on the final mile race three days later. When the day came, she led from the gun and, on the final lap, everyone was looking at the clock. Leather charged down the backstretch as the clock ticked toward the 5-minute mark.

She dipped across the line and the announcement came through: The time was 4:59.6. Leather had achieved something spectacular.

While Bannister’s feat had been plastered across newspapers, Leather’s was a more quiet affair. Her achievement garnered some local coverage but no national newspapers recognized this event.

More astonishingly, Leather was denied the official world record. Because the IAAF did not recognize the women’s mile (as it was deemed too dangerous), an official record could not exist. Still, Leather was undeterred. She would go on to race even faster. Her work on the track was far from over.

In 1954, Leather was awarded the Lord Hawke trophy for best woman athlete, and the following year, she won the national cross-country championships for the third year in a row. On Sept. 21 at the White City stadium in London, Leather reduced her mile record further, taking it down to 4:45. That time, although still not recognized officially, stood for more than seven years.

In 1960, the Olympic committee reversed the 1928 decision and allowed women to race in the 800 meters. At 27, Leather finally made it to the games as the captain of Great Britain’s team. Although her time at the race was far slower than her best, she had made it to the sporting event she’d watched on television as a young girl. The 1952 Olympics had inspired her to begin running—and the 1960 Olympics would be the last race of her career. Leather announced her retirement that year.

Following her retirement, Leather went on pursue a career in child protection and raise four children. After working through her 70s, she now enjoys her retirement and continues to sup-port the sport from the sidelines.

While she may not have been granted the same renown as Roger Bannister, who has since accepted a knighthood and seen his likelihood bronzed in statues and six-pence, Leather’s legacy continues to live on.

This spring, to celebrate the 60th anniversary of her and Roger Bannister’s historic achievement in running, both gave their names to a trophy at the Bupa Westminster Mile. At the race, nearly 600 women (just a few dozen shy of the men) followed in the footsteps Leather had long ago paved.