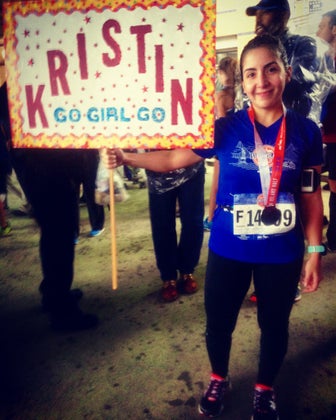 My breathing rhythmic, my legs churning with every pound of the pavement, my arms threatening to open wide and pull in the air like wings. I think of everything, I think of nothing. As I run, racking up mile after mile, I try to pinpoint exactly what this exuberance, this inner fire, means. I try, panting and charging ahead, to land on exactly what I am feeling. And then, it hits me. Free. What I feel is truly and utterly free.

I have been running for two years, and for the longest time I never considered myself a “real runner.” As much as I loved fitness, the idea of being a runner never appealed to me. Sure, I would run for 20 minutes or so on the treadmill at the gym to get some cardio in, but run? As in 5 miles—outdoors? Absurd. It was not until a little seed got planted in my heart that I would try to run a half marathon. Do it once, I thought. It would be something great to accomplish. Little did I know that the journey I was about to embark on would not only change me permanently, but teach me more about myself than I ever would have thought possible.

Yet, this type of thing has always been me. I was diagnosed with Crohn’s Disease at age 14, and as a result, struggled for many years through high school and college. Despite this, I was determined to power through with all the fortitude and grace of a woman determined not to be brought down by the hand she was dealt. Nothing can take me down, I would think. Not me. And so, this is the attitude I applied to all things. When I found exercise, I realized it made me feel better, stronger, more capable. But running took me to a new place. Alone with my thoughts, outstretched for miles and miles of a running trail, there was a place for me to release what might typically plague a person with chronic illness. I don’t know what it’s like to not think about Crohn’s Disease at least once a day. I’m fairly certain, as a result, that I’ve never known what having a “normal” stomach feels like either, even when I’m well. But running, magnificent in its simplicity, grants me the normalcy life was not kind enough to offer. Out there, on any race course, I’m simply a fellow runner. Neither “impaired” nor “handicapped” will ever appear on one of my race bibs, nor should they.

Rather, what managing a chronic illness has allowed is for the thrill of victory to feel that much sweeter. And so it began. I registered for my first half marathon in 2015, the AirBnB Brooklyn Half, and began to train. As I hit eight, nine and 10 mile runs for the first time in my life, I felt such pride and amazement in what my body was doing. Take a step back and see this, I would remind myself. Think of how amazing this is. Which, oddly enough, is something I did need to remind myself of, and often. Perhaps it’s this strange thought process, when you’re faced with a hardship akin to being diagnosed with chronic illness. Personally, I believe it can go one of two ways. You either decide, not necessarily then and there, that this will define you, or you decide that this will inspire you to simply be better than anyone would ever expect. The latter was the only option for me, and as such, I often chose to neglect the fact that I did things under the veil of “the afflicted.” I simply did not want to identify as a victim, or “less than” in any way.

But there are times when I have to remind myself that my accomplishments, particularly the physical ones, are that much more noteworthy. And without even realizing it, running had pulled me in and pulled me in deep. As race day approached, I had never been so excited to do something in my life. I had that nervous, excited fear that precedes the amazing, worthwhile things we do in life. My father made his next arts and crafts project a big sign that he and my mother would hold up on race day as they waited for me to cross the finish line, complete with inspiring slogans. And I did finally cross the finish line of my first half marathon in May of 2015, suppressing tears of joy as I hit mile twelve, and hitting my goal of coming in under two hours.

That’s the funny thing about life. Even after dealing with all of the expected hardship of having a chronic illness, finally having my health under control, and finding a sport that allowed me to feel freedom, joy and strength, there will always be the unexpected. My father passed rather suddenly nearly eight months ago. Now, there was so much more than my health to consider. Taking the forefront was a loss so crushing that it threatened to pull me under if I thought about it for just a moment too long. How could I make sense of this, how could I ever understand why this happened? What could I do, and how, my god, how could I ever make it stop hurting? Well, there was only one thing I could do, and that was run.

Since my father passed, I’ve run two more half marathons. In that same time, my love of running helped me decide that I would run my first marathon—the TCS New York City Marathon. What I wanted was to be guaranteed a spot in the race and to work hard for the year beforehand at qualifying for my entry. This year, I ran nine races and even volunteered with fellow runners at another in order to achieve that. I wanted to earn this for myself, and for my father, too. Every race I ran this year helped to rebuild my strength, helped make me feel just a little bit more normal again. Every finish line I crossed gave me a little push forward, as I continue to do my best to heal. My mother stood by at every single event I ran, and we helped each other process the unrelenting grief by knowing that although our guy could no longer be there physically, his presence in spirit was a constant one. In November of next year, during my first attempt at 26.2 miles, I will run in honor of my father. I will run for myself, for every person with Crohn’s Disease, for every person who has felt the loss of a loved one, and in my father’s memory, too, because it guides me on a daily basis. He was always so proud of what I could do. And now, when I feel the warmth of his presence during the last few miles of any race, I know he is willing me to never give up.

I remember coming home to my parents’ house the day before my first half marathon, ready to rest and prepare for the next day. I walked into the house, and stopped to look at my father’s finished product—the sign he would hold up for me at the finish line. I laughed to myself, knowing how much detail he had put into it, because that was how he approached any project. I smiled at the slogan he had settled on. “KRISTIN,” the top of the sign read, in large, glittery letters, “Go Girl Go.” I feel the nervous, excited fear building up in me again as I ruminate about what running will help me accomplish next year. It will tap into my inner strength, fearless desires and eternal love for my father. Every time I envision crossing the finish line of my first marathon, there is one thing that is constant in the memory. I hope to have my arms stretched out wide in pure joy. I hope to have a smile stretched across my face and a light in my heart that will surge throughout my whole body. But I know that my father’s sign will be there waiting for me. “Go Girl Go,” indeed.