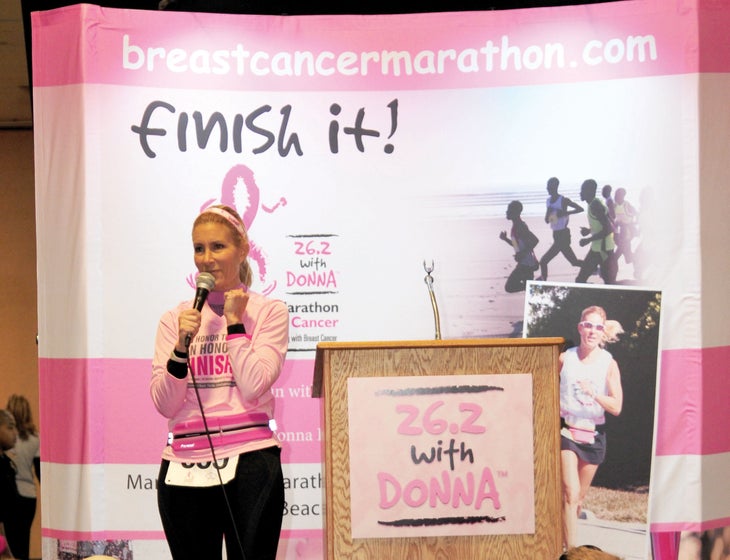 In December 2007, Donna Deegan sat in her doctor’s office, dumbfounded by the diagnosis she’d just received: The cancer she’d fought twice before was back. This time, in her lung.

The timing added to her heartbreak. It came just three months before the inaugural 26.2 with Donna National Marathon to Finish Breast Cancer in Jacksonville, Fla., which Deegan had been planning for two years.

“I thought it was a sick joke,” Deegan says. “What marathoner can stomach a diagnosis of lung cancer?”

Deegan was first diagnosed with breast cancer in 1999 at age 38. The First Coast News anchor started a blog about her treatments on the station’s website and was touched by the people she connected with, many of whom told her they had trouble making ends meet while going through treatments. That led her to create The Donna Foundation, which provides funding to breast cancer patients in the Jacksonville area.

At first, the foundation raised money through local road races, but soon Deegan wanted the foundation to have a race of its own. Despite her personal struggle, Deegan, along with more than 7,000 runners, turned out for the inaugural 26.2 with Donna marathon in 2008, raising more than $800,000 for breast cancer research at the Mayo Clinic and The Donna Foundation. Deegan ran the full 26.2 herself in the midst of her chemotherapy treatments.

Since that first race, the annual marathon has raised more than $3.5 million. Deegan beat her battle with cancer and has been healthy (and running!) ever since.

“It’s very empowering to keep running while you’re going through cancer treatments,” says Deegan, now 52, who left First Coast News last year to focus on The Donna Foundation full-time. “Marathoning is a great analogy for treatment, and for every kind of struggle. There’s a point in every marathon where you want to sit in the road and cry. But if you push through those struggles, you get to a really good place.”

“The people who run our marathon and make a huge difference with every step in the lives of others.”

Donate to The Donna Foundation at donnahickenfoundation.org. Or run the race yourself on Feb. 23, 2014. Learn more at breastcancermarathon.com.