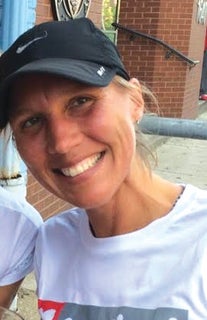 I began my running career by the suggestion of a friend from work. I had never run before and had recently lost 40 pounds after having three children and was nervous and excited about a new challenge. I was in an abusive marriage for 12 years—the abuse was physical in the beginning and “got better” to where things were only verbal and emotional by the end.

Abusive people make you feel weak and worthless. They tell you who you are and what you can and can’t do. Running changed the way I thought of myself; it quieted the hurtful voices in my head, as every longer distance, every completed race, every hour challenged me to see I was more than who he told me I was. He was stronger, he had a career, he had money, and all of that he could take with him at any moment, but I had running—and no matter what he took, he couldn’t take that from me. Running was a time when I was not being controlled.

Sometimes runs were a time when I didn’t think I could go back, sometimes runs were a boost of strength to try harder to see if I could make things better, but they were always mine. Runs also forced me to take care of myself better, eat healthier and rest more—runs forced me to learn to put myself first sometimes. There was a great comfort in knowing I found a place for myself. Running helped me find my courage to not take abuse anymore. It was on a run that I came up with my plan for divorce.

I didn’t run for almost a year after my divorce. The sadness and turmoil were so emotionally draining I didn’t have the strength to do it, but I thought about it every day. Things didn’t get better, but I couldn’t let my ex-husband take away running; I figured if I let him do that I might as well have just stayed with him. He didn’t win and I am happily running again and feeling so grateful!

Running for me started out as a solitary effort. I started with just a mile and each day I added another driveway farther, another loop around the block. There was a journey of self-talk during this time that started as mostly pain talking, so I would look down the street and see myself at the next light. I tried looking at my feet so I didn’t realize how far I had to go. I tried counting songs to distract myself.

As the years have passed, my self-talk is inspiring and hopeful. I no longer project myself down the street. I am grateful I have a healthy body to take me where I’m going. I listen to the birds and feel the wind on my face. After about two years, I started running with a friend and found that on a run she and I could solve almost any problem. We often joked that if you gave us an hour to run we could solve the world’s troubles one by one. Running was an immediate love regardless of how hard it was at first because when I went another driveway or completed a faster time there was this feeling of accomplishment that no one owns but me.

I have since participated in many 5Ks, 10Ks, half marathons and relays. Nonrunners don’t understand the grit it takes to be a runner, the self-love you find, the sense of accomplishment you own. There is a connection between your mind and your body and when you find it, you can accomplish anything. Women who may be like me need to see that they have great worth and value and that their abuser’s version of who they are is false. I am currently studying to get my personal trainers certification and would love to create programs in abuse shelters to help women find their inner strength through running and fitness.