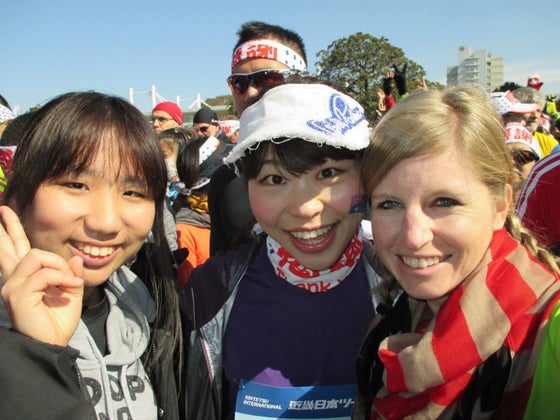 My main passions in life are my husband, traveling and running; the order in which I name them often depends on how many rogue socks my husband has left on the floor that week. I spend as much time as possible running, traveling or both, sometimes with my husband and sometimes without. I’ve visited 16 countries and 49 states, which is a lot more than some people and a lot less than many. I could tell you all about the places I’ve been and the sites I’ve seen but I won’t, because they fade from my memory compared to the one thing I’ve seen everywhere I’ve visited so far: runners.

I’ve noticed it before, but on my recent trip to the Azores Islands—a small archipelago located off the coast of Portugal where cows outnumber people by a lot—I was struck by the presence of runners in a new way. The sporadic rainstorms popping up along the winding mountain roads didn’t stop them, nor did the village sidewalks barely wide enough to accommodate a 10-year-old boy. Everywhere I looked, rain or shine, there the runners were—slow, fast, lean, large and everything in-between. It took me back to my trip to the Middle East last year, where I saw women running with long black pants, long sleeves and head scarves in the 100+ degree heat; they were running just the same. I revisited Japan, where local running clubs rise early to pound the pavement in Tokyo before the hustle of the day begins to hum. My mind recalled local runners in Ecuador in worn shoes navigating cobblestone streets as they navigated the colonial squares. I went back to Jamaica and remembered the sharp laughter and cheers of a high school track and field team as they flew barefoot around their practice field, dodging goats as they did their laps.

It seems like we can’t turn on the news today without being bombarded with some type of terrible update; the terrorist attacks of late have cultivated extensive fear and contributed to a growing xenophobia across the world, while our presidential election process here in the United States—no matter who you support—seems to somehow resemble a Three Stooges movie a little more every day. No matter which way we turn, it can feel like we’re constantly reminded of how different we are from everyone else, how opposite our religious beliefs, political affiliations, accents, families and goals are. The world feels divided an awful lot lately.

It can be easy to fixate on our differences when they seem so obvious. But no matter where I’ve visited in my travels, there’s one thing I can’t deny; I’ve seen runners. I’ve seen people like me. We may not eat the same pre- and post-race meals or wear the same type of running clothes. We might not agree on politics or see eye to eye on religious beliefs. Our iPods might not be playing the same type of music and we might disagree on the merits of women in sport. But I can guarantee that we both know the satisfaction of completing a grueling speed workout and the heartache of just missing out on that PR. We all appreciate the dedication required to survive a marathon training cycle and know how annoying it is when you can’t find the one piece of gear you really wanted to wear on your long run. We all know the thrill of victory and we all have felt the crush of defeat.

So the next time you find yourself in unfamiliar territory and feeling like a fish out of water, look for the runners. I promise, they’re there. They might not look like you or think like you, but you have an unbreakable bond without ever speaking. The world can be a big and scary place, but so is the starting line of a race you’re undertrained for. And we all know what that feels like.

What Is It Really Like To Run In Iran?